Here I present letters from the period ca. 1840 to ca. 1875, which either went from the USA to the German States or to the USA and, as a rule, were sent without stamps. Of course, there were already stamps (from the USA e.g. from 1847), but due to many small German states and the resulting many postal services, it was impossible for a normal postal worker in the USA to determine the total postage for a letter. As a result, the letters were sent "unpaid" and the costs incurred and the costs incurred had to be paid by the recipient.
If it was letters to Hamburg or Bremen, it became easier when Contracts with these cities and the U.S. Postal Service came into effect. Later, when the "Norddeutscher Postbezik" was founded, and of course after the foundation of the German Reich, the costs to be paid were simplified.
My letters usually went via the designated "exchange offices", Bremen, Hamburg and later, at the beginning of the "Prussian closed mail", also Aachen (more precisely "Traveling Post Office No. 10, Cologne, Verviers"), which was actually a railroad post office on the route from Cologne to Verviers in Belgium. For this contract, the mail was put into a sealed bag in Aachen, then sent via England (mostly Liverpool) to New York or Boston (the "Exchange Offices" there) and only reopened there.
For a few years, starting around 1860, there were "Exchange Offices" with corresponding stamps in other cities in the U.S., in addition to Boston and New York, which were "Exchange Offices" from beginning to end. They were: Baltimore, Chicago, Detroit, Philadelphia, Portland, Me. and San Francisco.

I have not yet "dared" to calculate the postage for my letters. I would have to have all the documents together. Well, then I still have something to do in the future.
Source reference:

I noticed a long time ago that in the book "North Atlantic Mail Sailings 1840-1875" by Hubbard/Winter there are errors in the timetable of HAPAG. For example, there is no arrival data for Hamburg for the last years. (There is a note about this).

Since this has disturbed me more and more, I have begun to research these data and to supplement. At the end the years 1869 to 1891 should be covered.

For my research I use the website of the association "EUROPEANA" of different European libraries. I use for this mainly the digitized issues of the Hamburg newspaper "Hamburgischer Correspondent" of the "Staats- und Universitätsbibliothek Carl von Ossietzki" in Hamburg. EUROPEANA - Newspapers

In the process, I noticed errors in data and missing trips. These are called "extra boat" in this newspaper. They are additional trips to the scheduled trips.

I have completed the years 1869 to 1875 and am making them available for download here as a PDF file. I will add this of course constantly supplement. 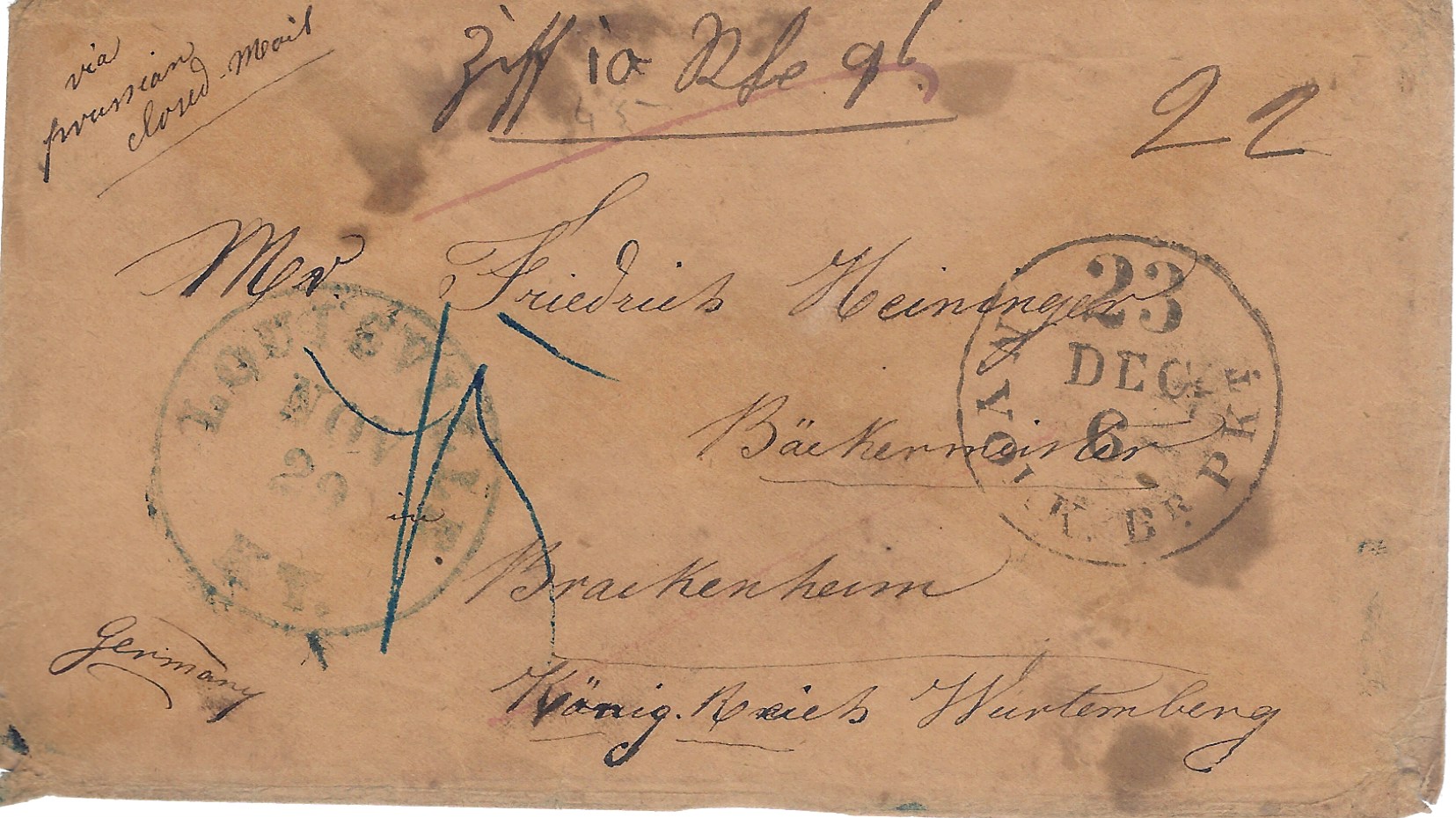 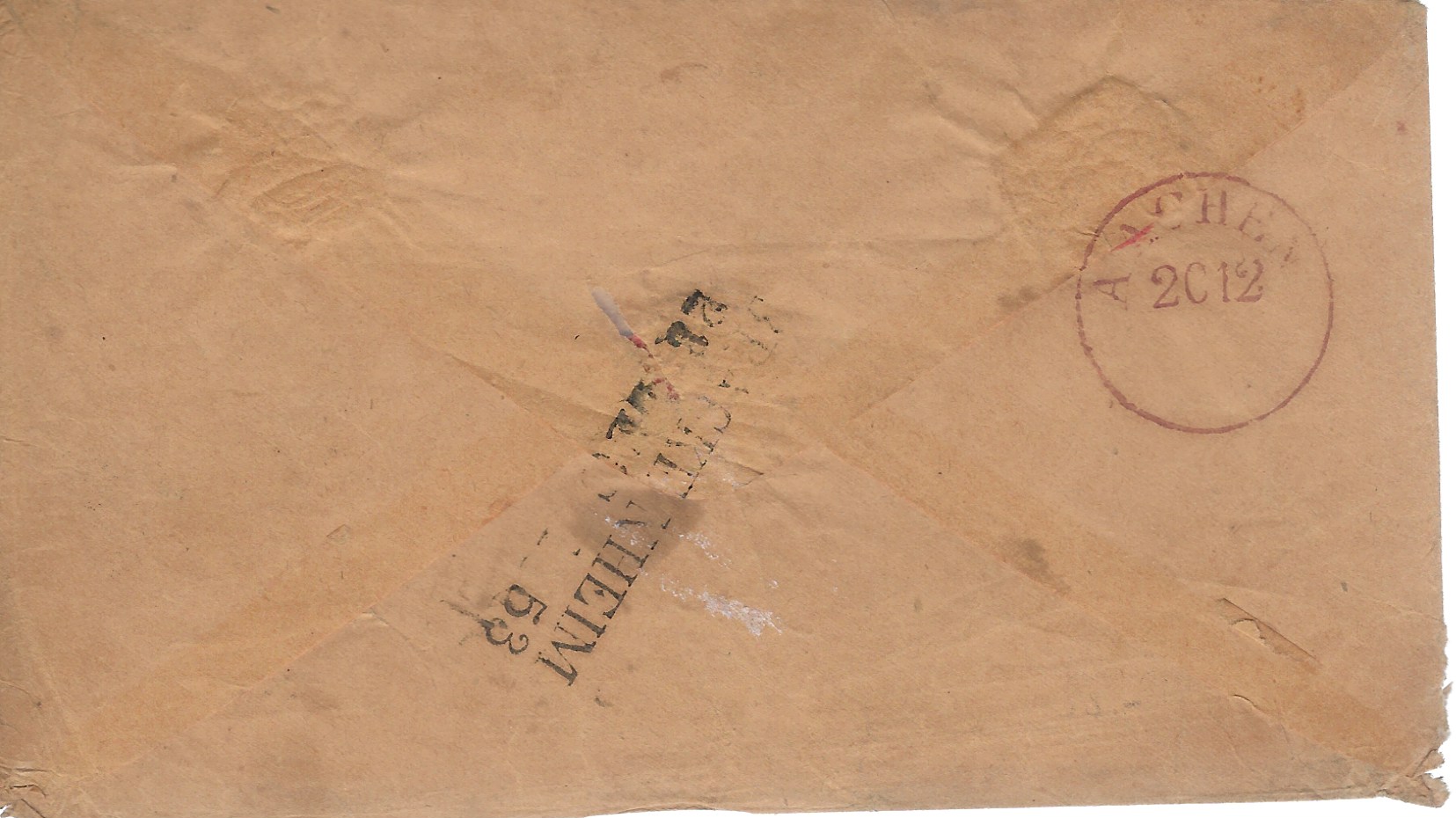 Transatlantic cover from 1853 from Louisville, KY to Brackenheim, Württemberg, Germany. Postmarked at Louisville, Kentucky on November 29 (1853). Then postmarked December 6 (1853) at the New York Exchange Office, Br. Pkt. The sender's note "via Prussian closed-mail" at upper left.

According to Hubbard/Winter, a ship left the USA for England on 07 December 1853. The "Canada" of the "Cunard Line". However from Boston!! Arrival in Liverpool 20 December 1853. The reverse postmark from Aachen also has the date 20.12.(1853).
During my online research I found that the "Canada" of the "Cunard Line" arrived in Liverpool already on December 19th. So it was reported in the Hamburg newspaper "Börsen-Halle" on December 22. (To be found in the "State and University Library Hamburg Carl von Ossietzki")
Thus, it matches the postmark date of Aachen.

The usual procedure was to postmark the letter at the Exchange Office, there was one in New York and one in Boston, where the letter was taken on a ship. And with the date of departure of the ship.
But it also happened, as with this letter, postmarked in New York, but the ship sailed from Boston. It was rare and the reasons for this are not yet known to me.

The letter was written on 19 December 1854 and postmarked in Angermünde (Uckermark/Brandenburg) on 22 December (1854). This is located between Schwedt/Oder and Eberswalde - today near the German-Polish border.

December 24 postmark from the "Exchange Office" in Aachen. So "Prussian Closed Mail" via England, here Liverpool. Transported by the ship "Baltic" of the American "Collins Line". Left Liverpool on 30 December 1854 and arrived in New York on 11 January 1855. See postmark of the New York "Exchange Office" on the front.

Addressed to Galena, Illinois, which is located between Cedar Rapids and Milwaukee/Chicago on the Mississippi River. 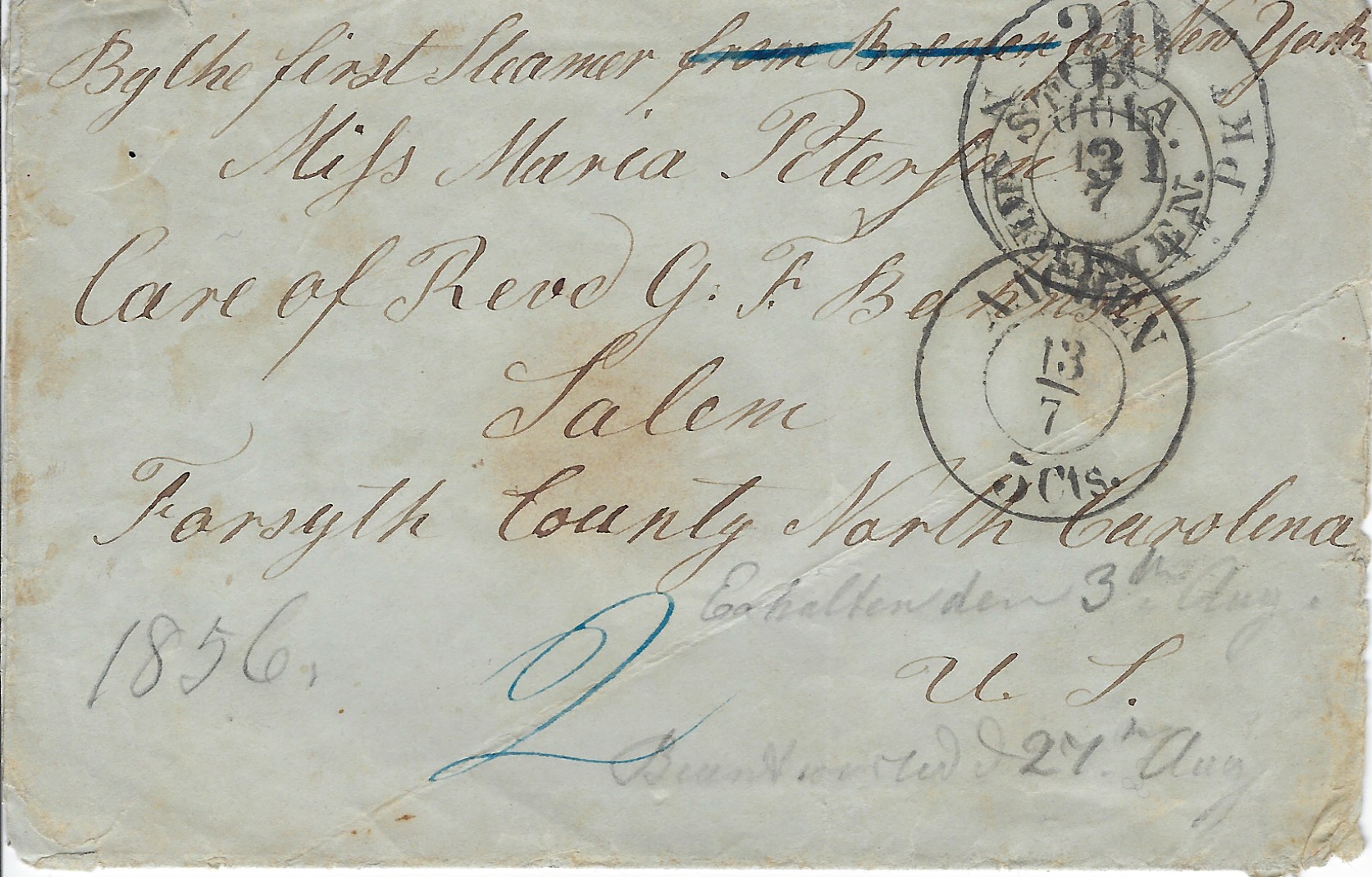 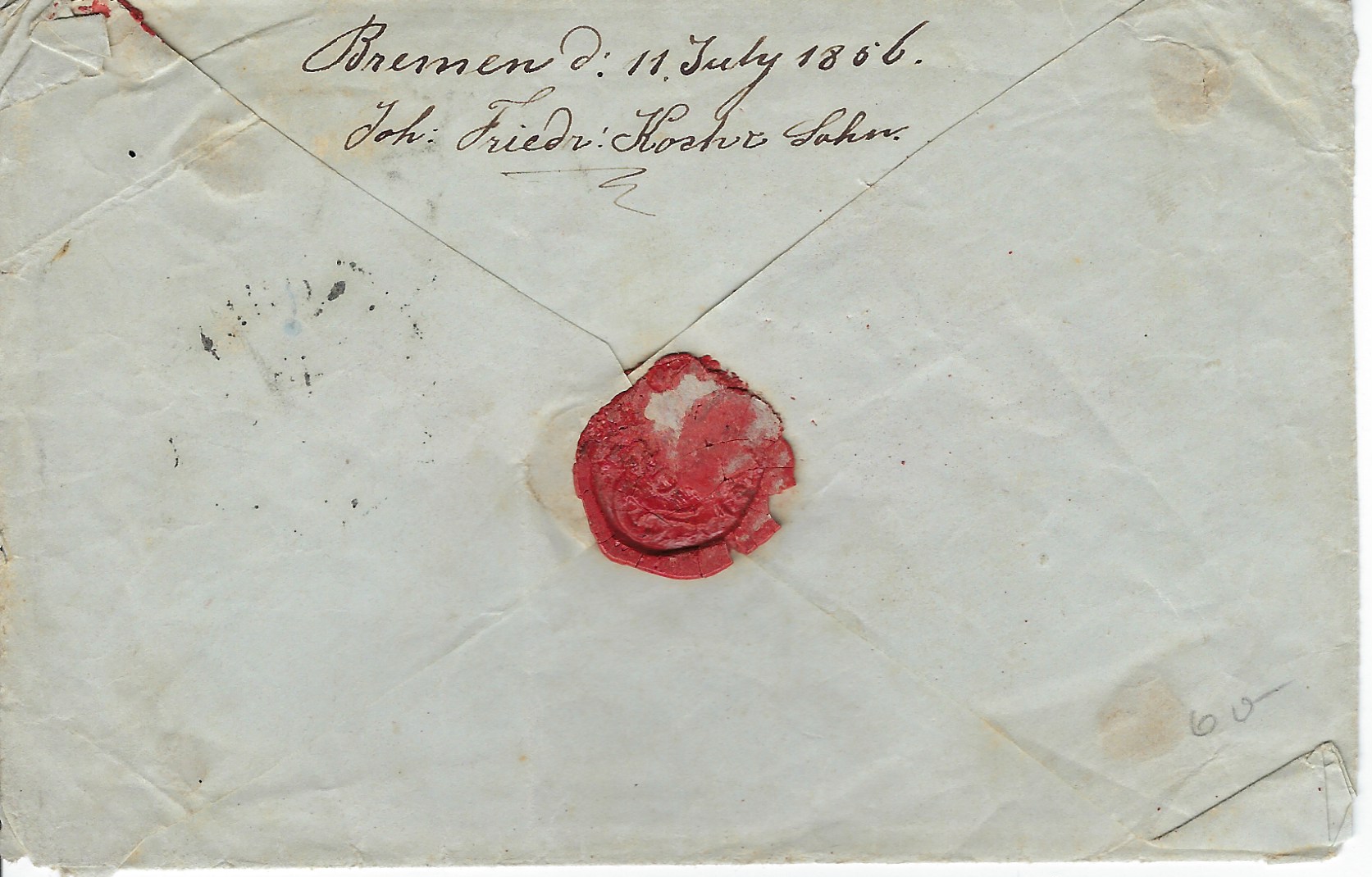 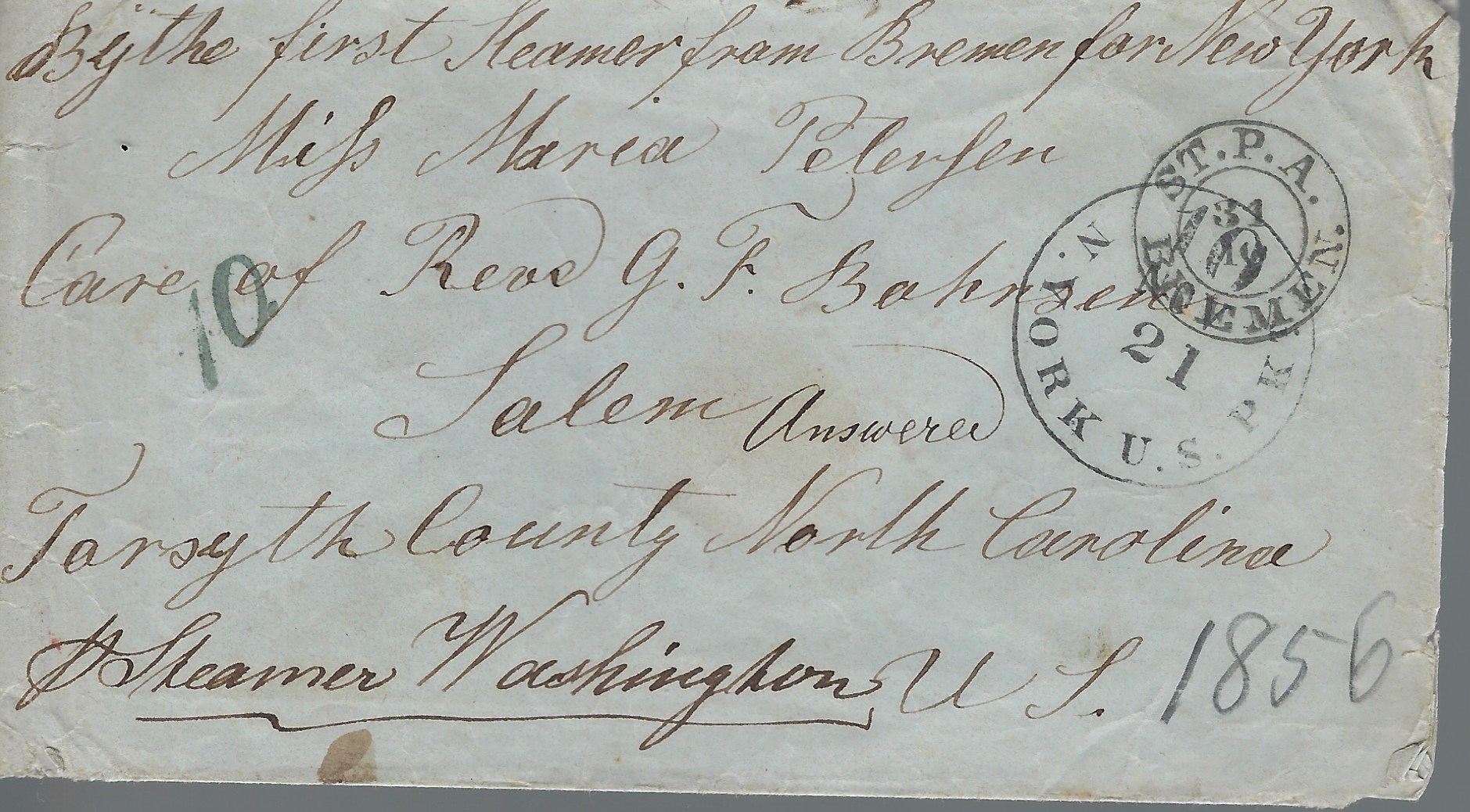 Postmark from Bremen City Post Office dated 12. July - Handwritten in the upper margin "By the first steamer from Bremen to New York" with "from Bremen" crossed out.
Postmark of Aachen dated 13 July - Aachen/(date)/ 5 cts. - this means the letter was routed via England by "Prussian Closed Mail".
Probably Left Southampton with the Ocean Line ship "Washington" on 16. July 1856 and reached New York on 30. July 1856. Postmark NEW YORK/ AM. PKT./(date)/30 - with date 31. July(1856). This ship came from Bremen, but left Bremen on 12. July, the date of the postmark of the Bremen city post office. Probably the letter missed the ship in Bremen.
Addressed to Salem, Forsyth County, North Carolina. No arrival stamp. Handwritten note "received 3th Aug". 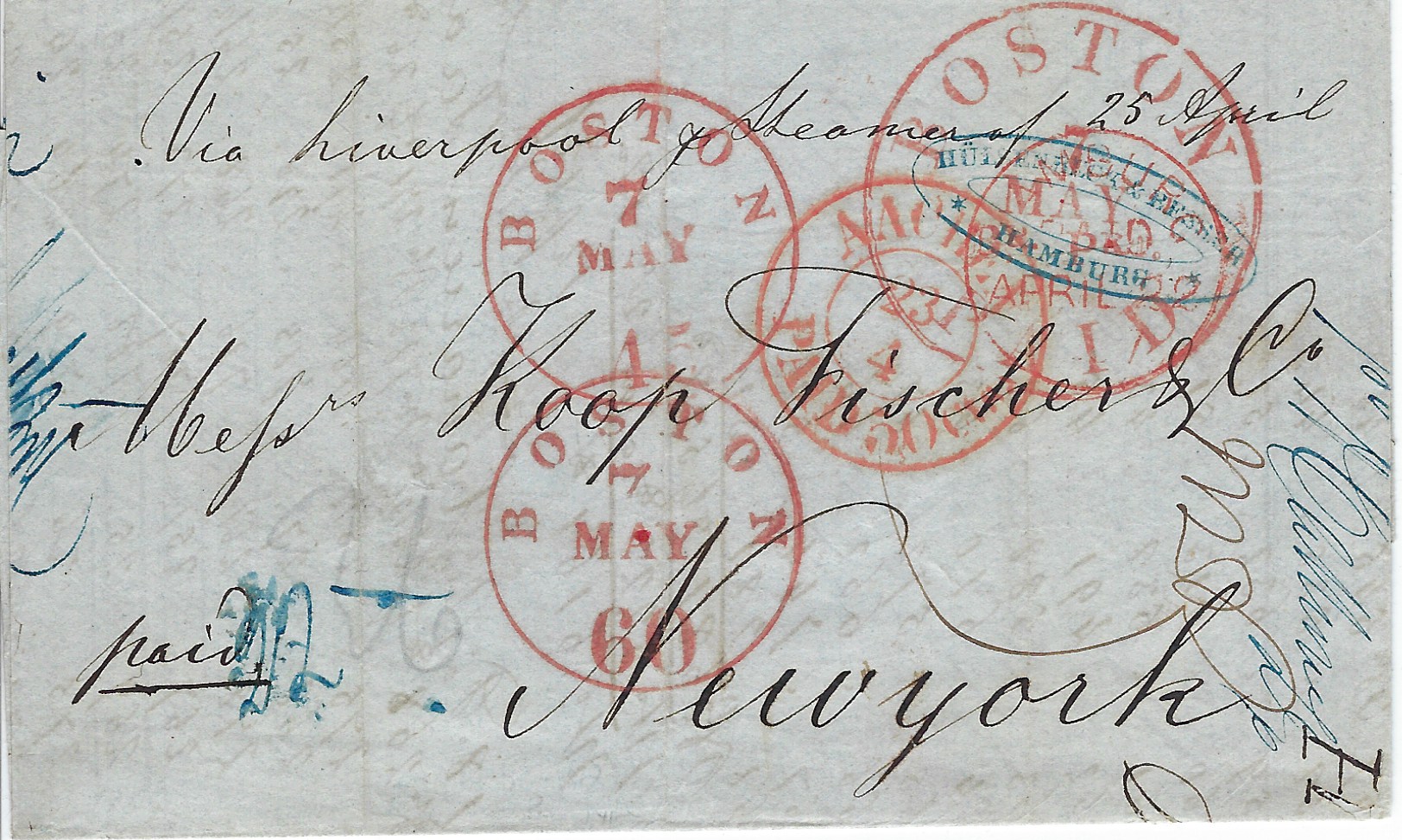 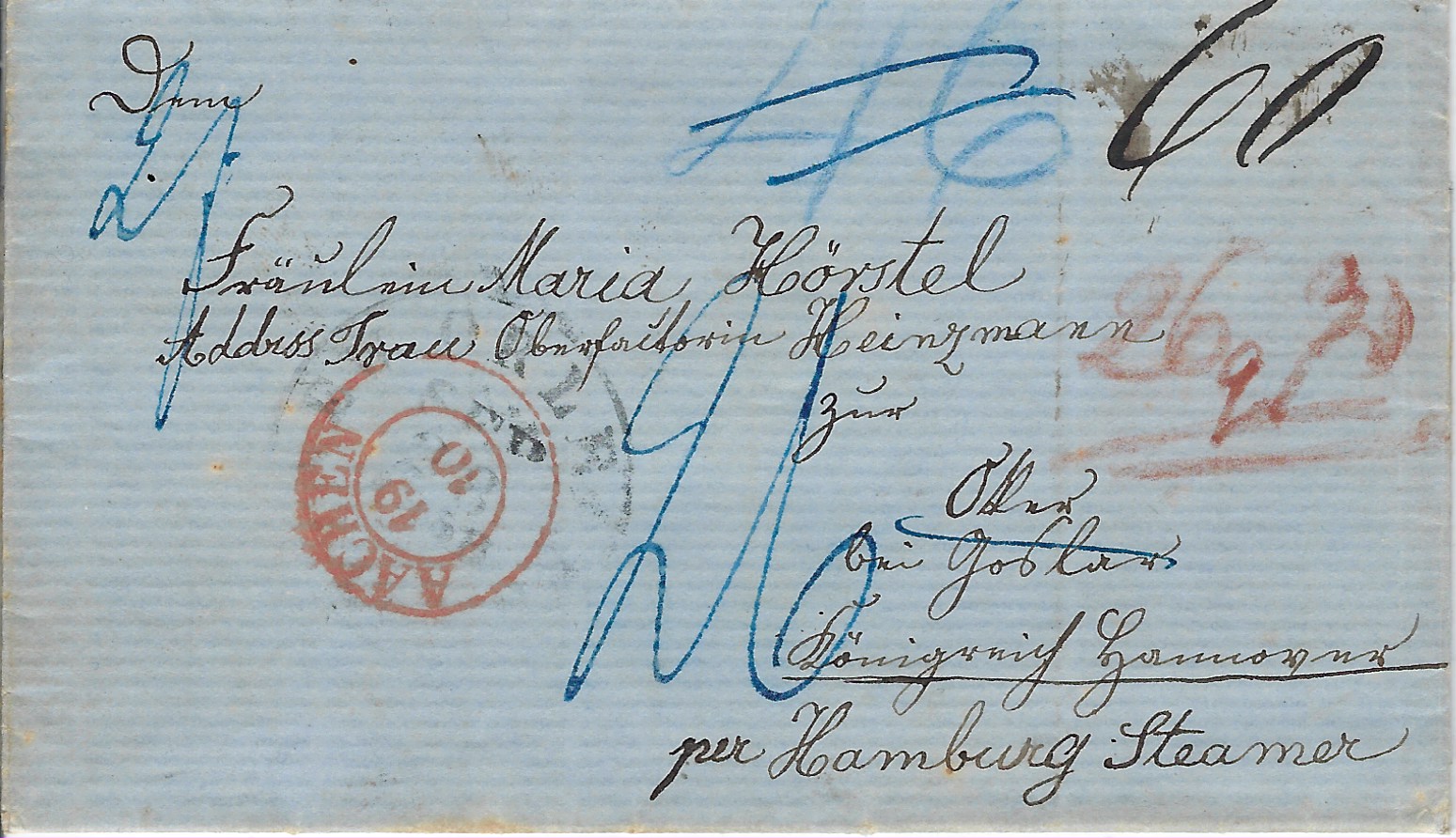 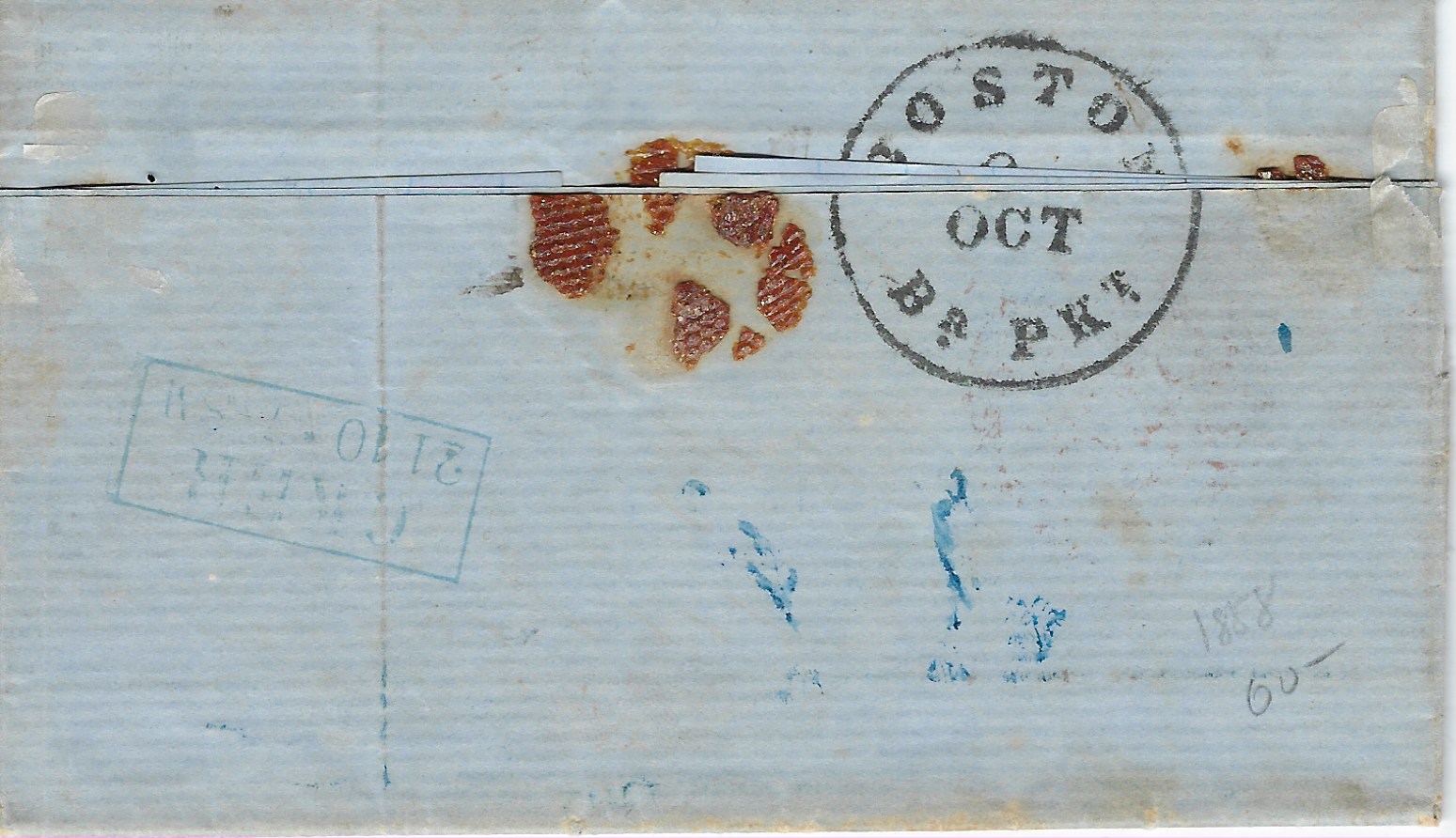 A "double rate letter" written in Hamburg on April 18, 1857, postmarked at the city post office on April 22, 1857. notation at the top of the letter "Via Liverpool p Steamer of April 25".
The letter was sent to the "Exchange Office" for the "Prussian Closed Mail" in Aachen. There it received the postmark "Aachen/(date)/PAID 50 cts." Dated April 23. From here it went in a closed mail bag via Belgium to Liverpool. On April 25, 1857, the Cunard Line ship "Europa" sailed, reaching Boston on May 7.
In Boston, the bag was opened the same day and received three postmarks. The first - "BOSTON/(date)/BR. PKT./ PAID", the second stamp with an incorrect "45"(cents) as prepayment, and then the third correctly with "60"(cents) as prepayment and thus paid in full.
Since the business letter contained an invoice for a shipment of goods, it went to customs where a postmark dated 26 May 1857 was struck.

Very faint postmark New Orleans 28 September 1858 ??. Handwritten "per Hamburg Steamer", but HAPAG did not go to Boston. So "Prussian closed Mail", because via Aachen and before Liverpool. The letter was carried by the Cunard Line (br. Packet) with the steamer "Niagara" - departure in Boston 06. October 1858 - arrival in Liverpool 17. October 1858. Postmark from Aachen 19. October 1858. 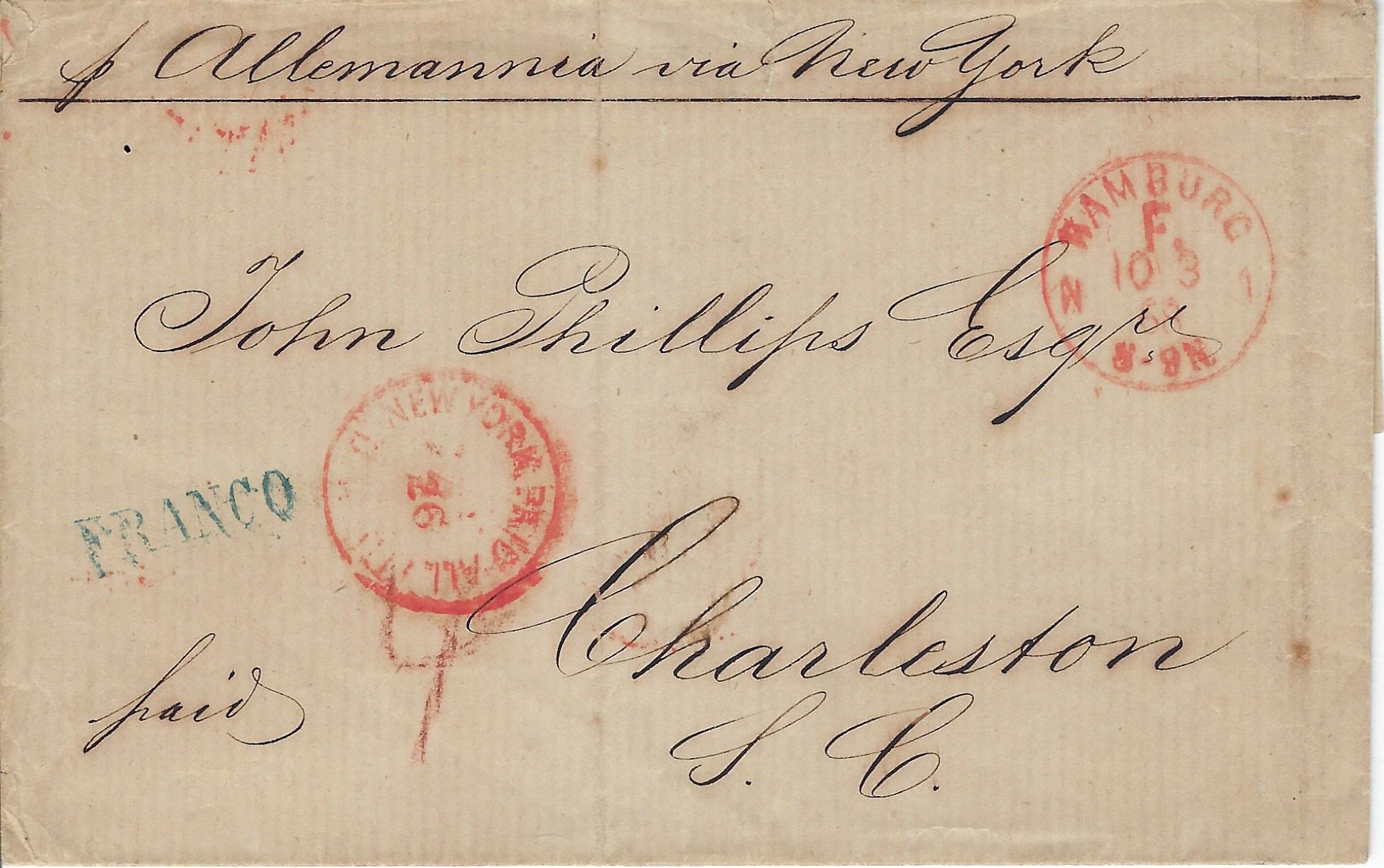 Postmarked in Hamburg on 10. March 1868 with red "F" (Franco) stamp of the Prussian post office with the number "1", which was meant for letter mail. Then there is a green stamp "FRANCO", where I only found out that it should mean "consignment franked by the sender handed over to others by the Prussian Post Office".
Departed Hamburg on the HAPAG ship "Allemania", as handwritten above, on 11. March 1868. Arrived New York on 25. March 1868. Postmarked in New York on 26.??, probably March. No arrival postmark from Charleston. 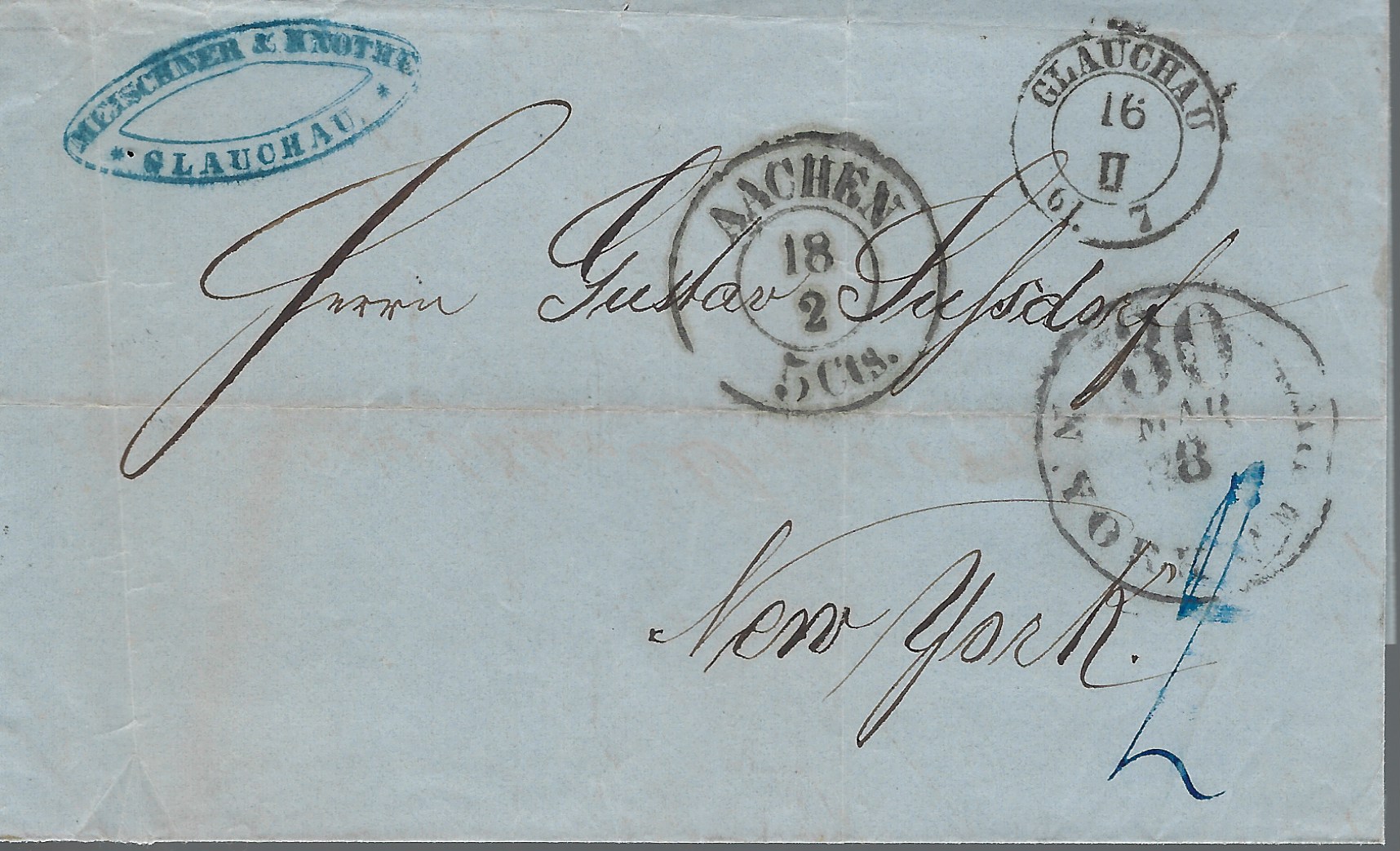 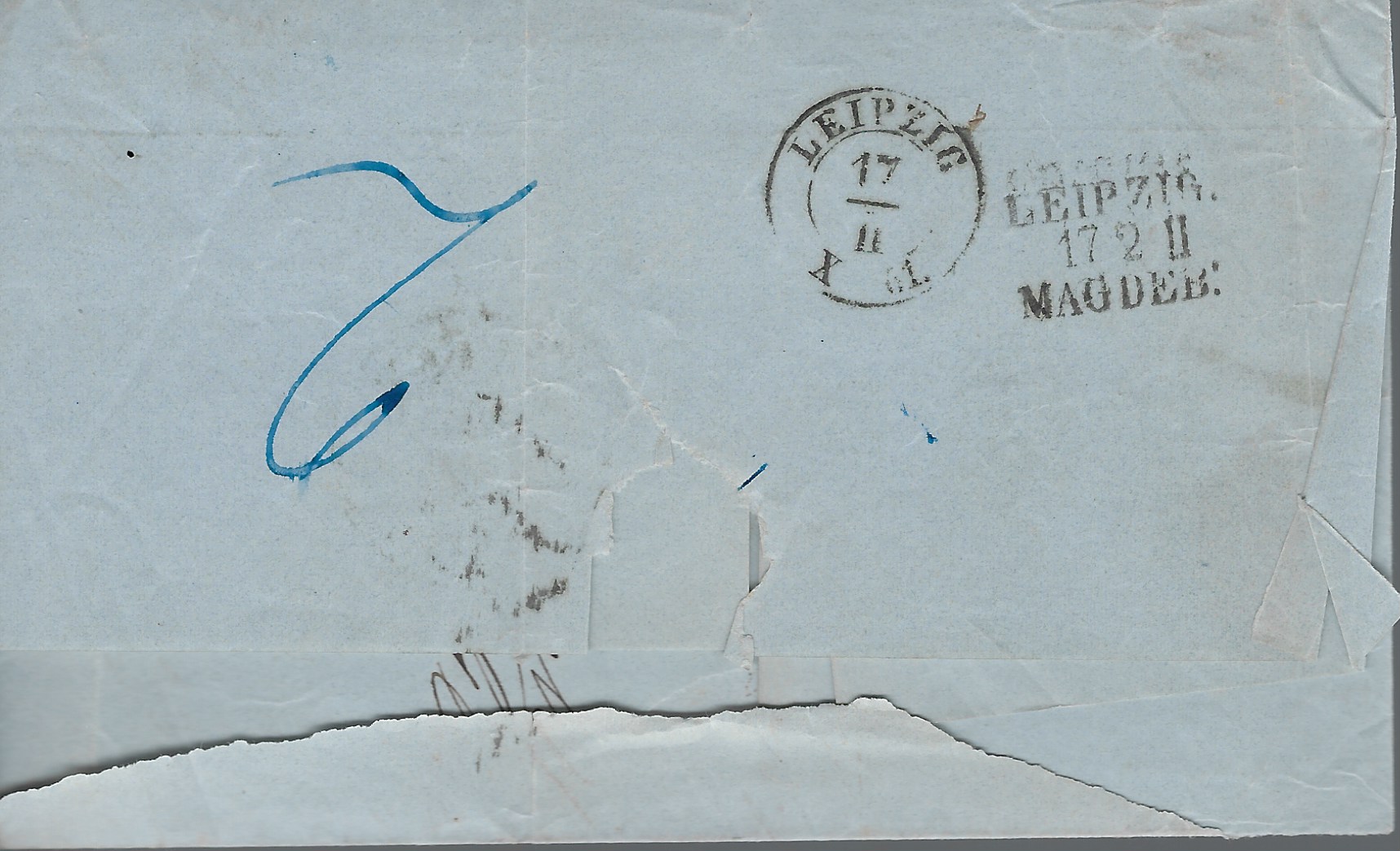 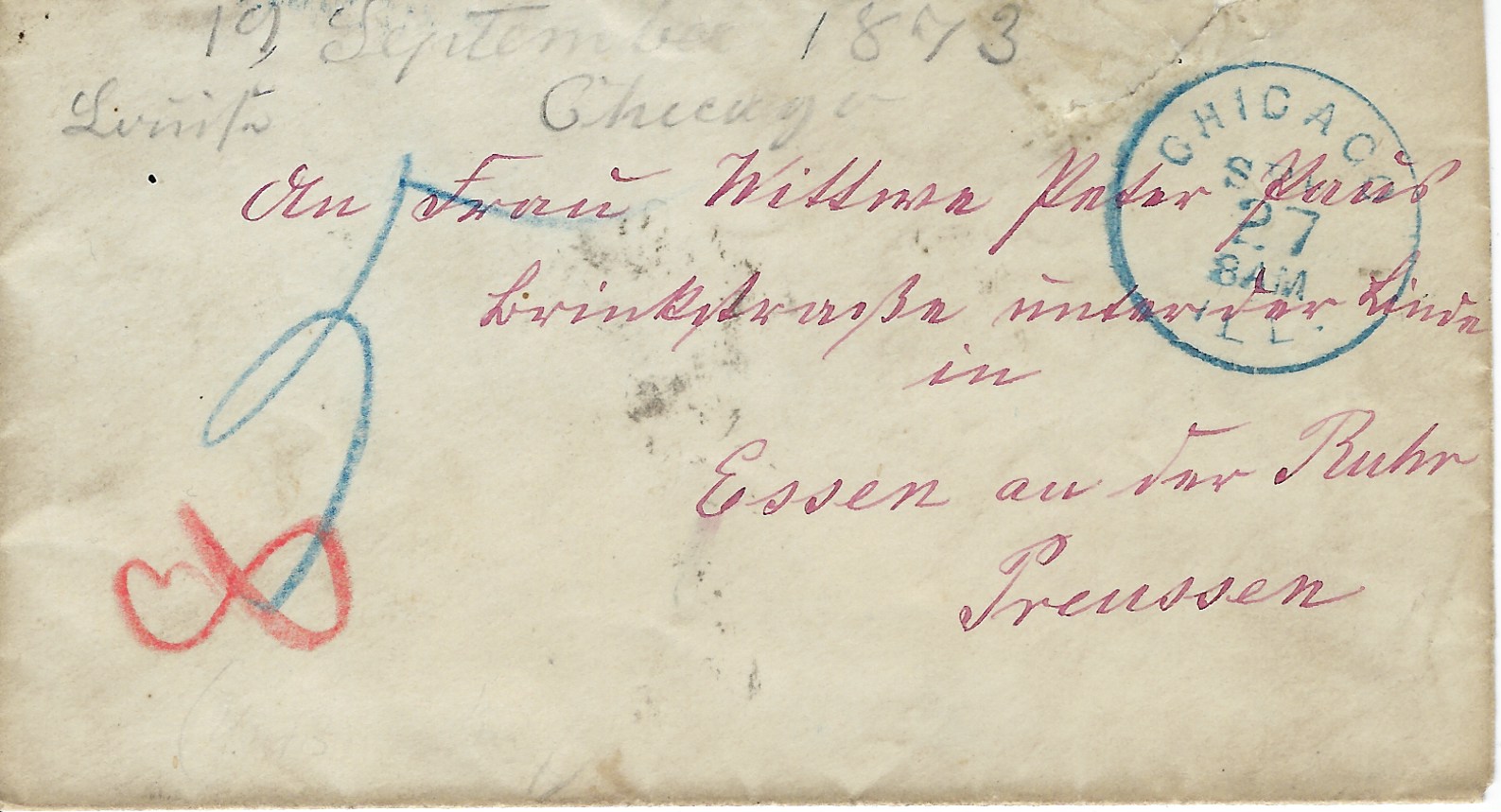 City postmark of Chicago dated 27 Sep (1873) - reverse: postmark "Chicago direct" dated 30 Sep (1873), a "maritime mail marking" (stampless cover catalog). There are such postmarks from 4 or 5 cities other than NY or Boston, which mean that these cities were also an "office of exchange" at the time, like NY and Boston. In the publication of Hubbard/Winter only the "exchange markings" of NY are shown in great detail. In the "stampless cover catalog" the ones of the other cities can be found.
It sailed the "Cimbria" of Hapag from New York on 02. October 1873 to Plymouth 13. October 1873. Alternative: Cunard - ship "Algeria" from New York on 01. October 1873 in Liverpool on 12. October 1873. It is still unclear to me with which ship the letter was sailed. 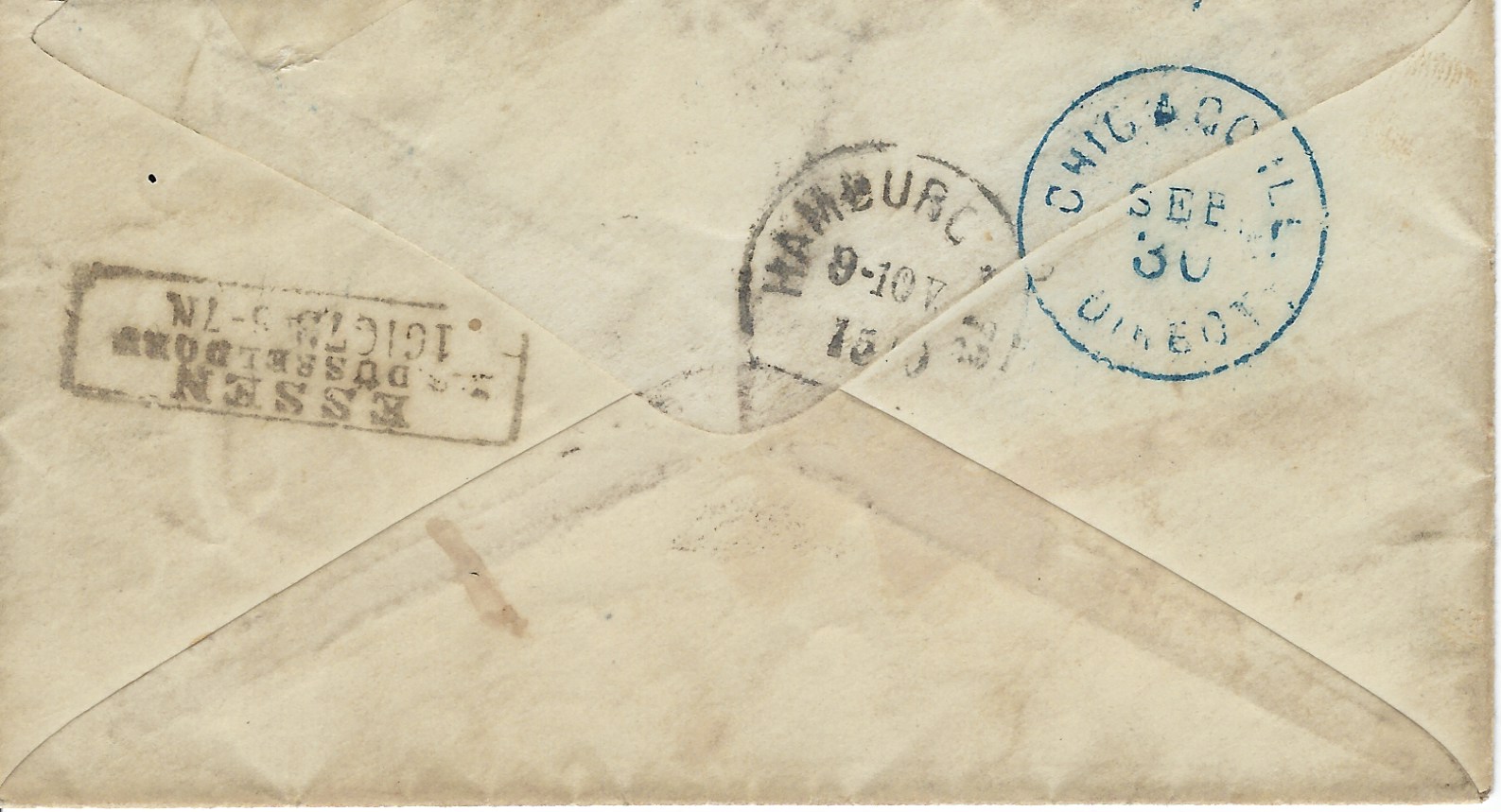 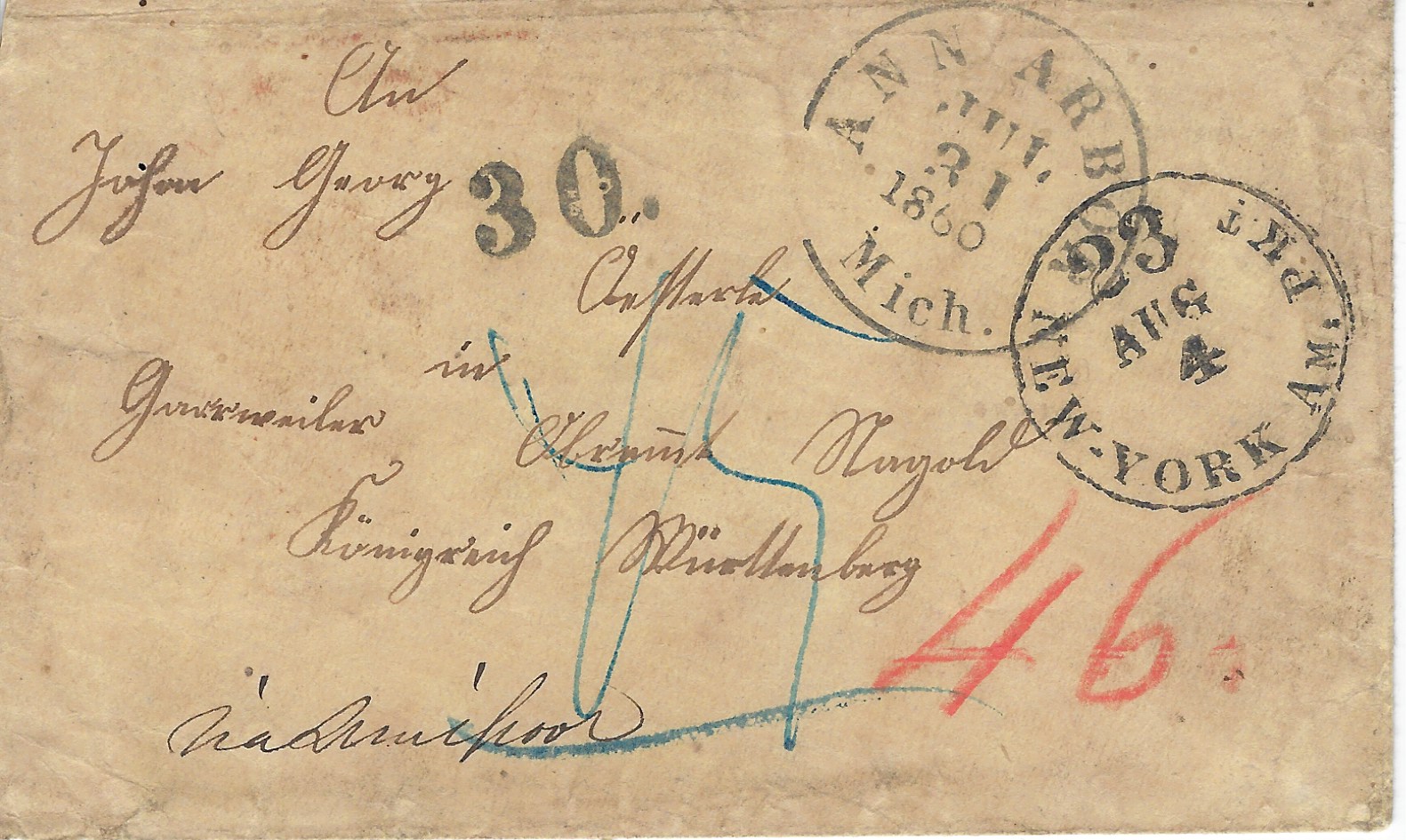 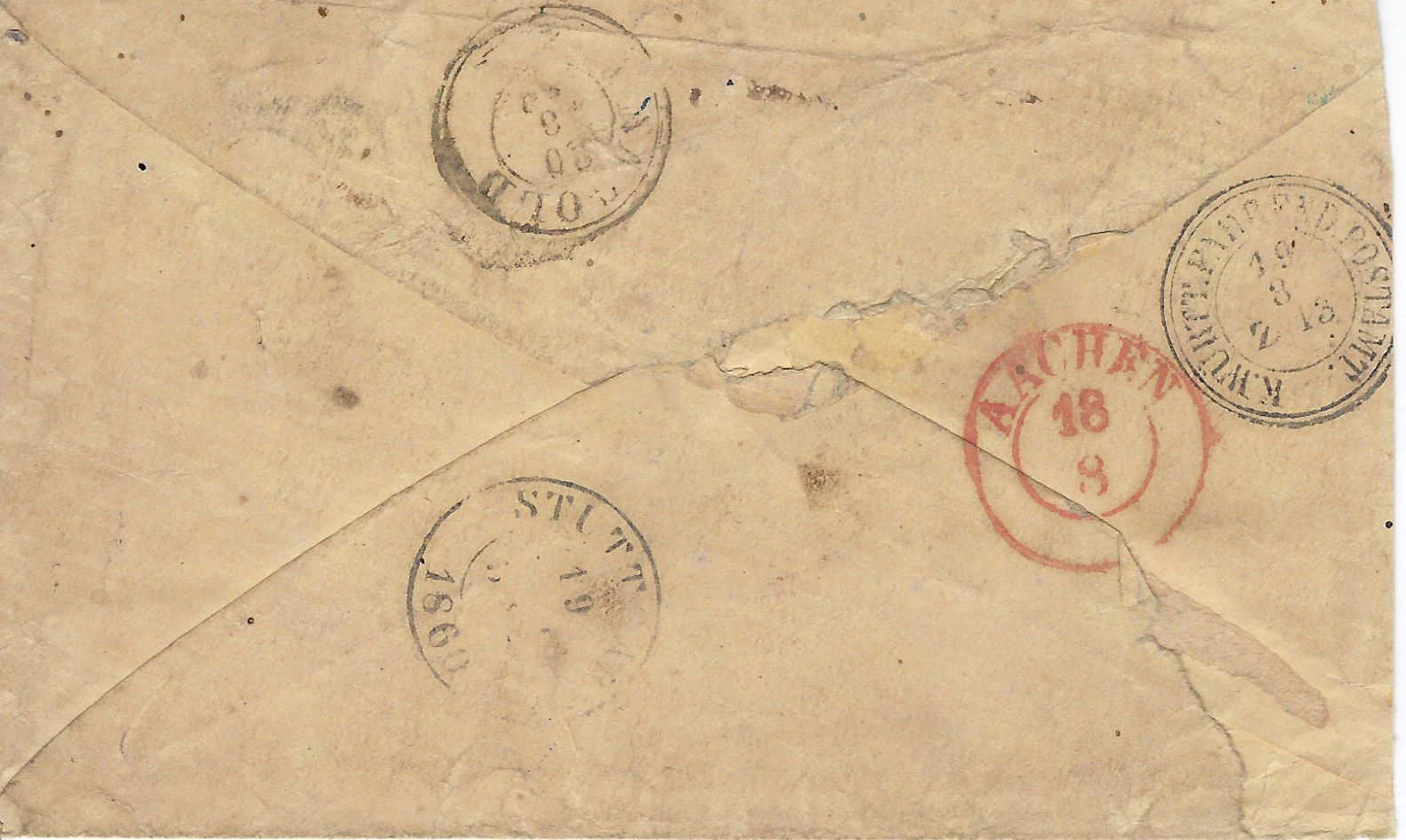 Reverse: postmark "Chicago direct" dated 30 Sep (1873), a "maritime mail marking" (stampless cover catalog). There are such postmarks from 4 or 5 cities other than New York or Boston, which mean that these cities were also an "office of exchange" at the time, like New York and Boston. In the publication of Hubbard/Winter only the "exchange markings" of New York are shown in great detail. In the "stampless cover catalog" the ones of the other cities can be found. 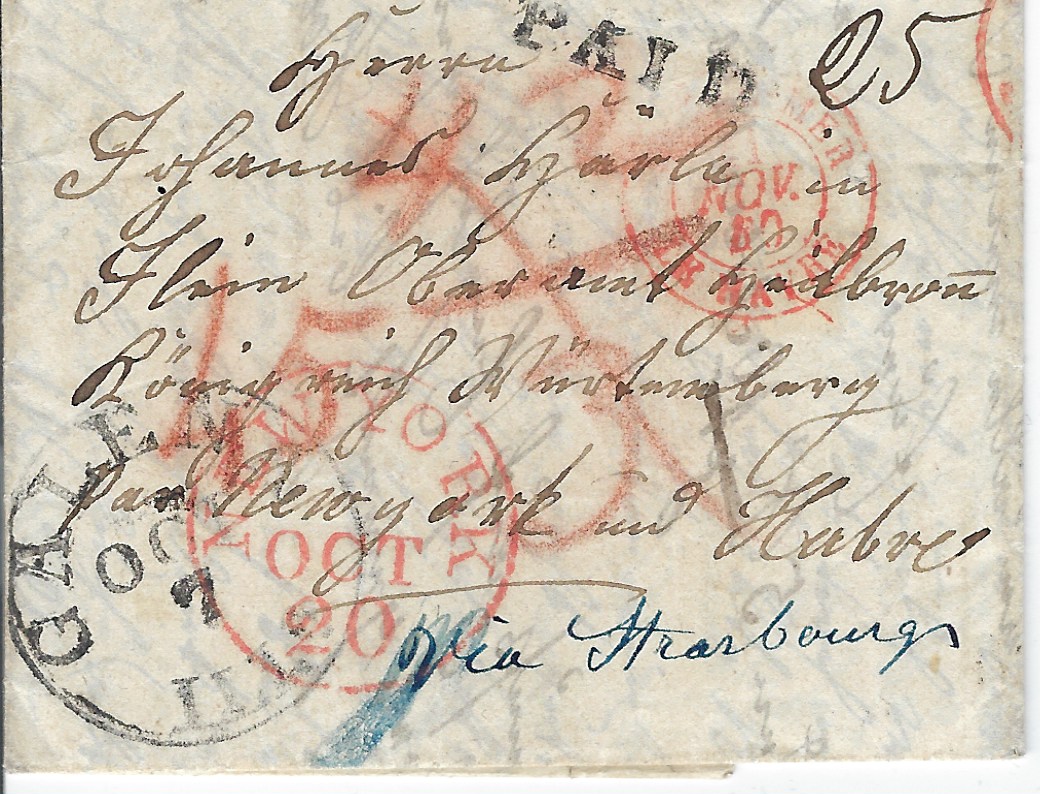 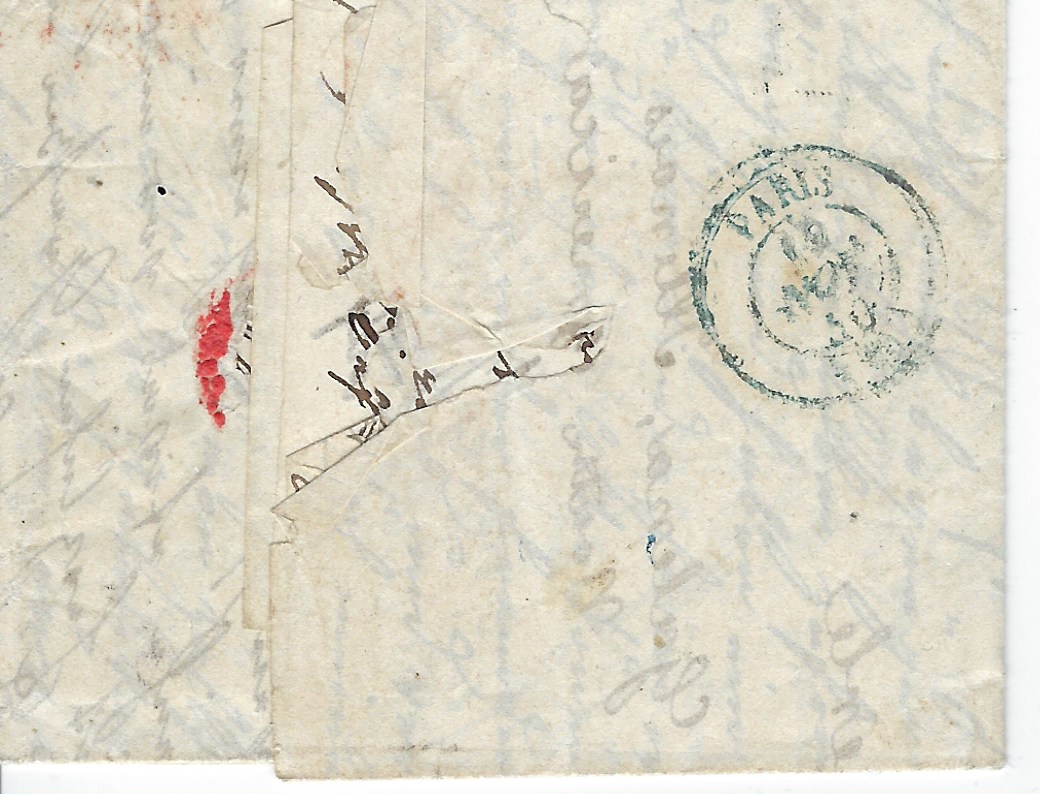 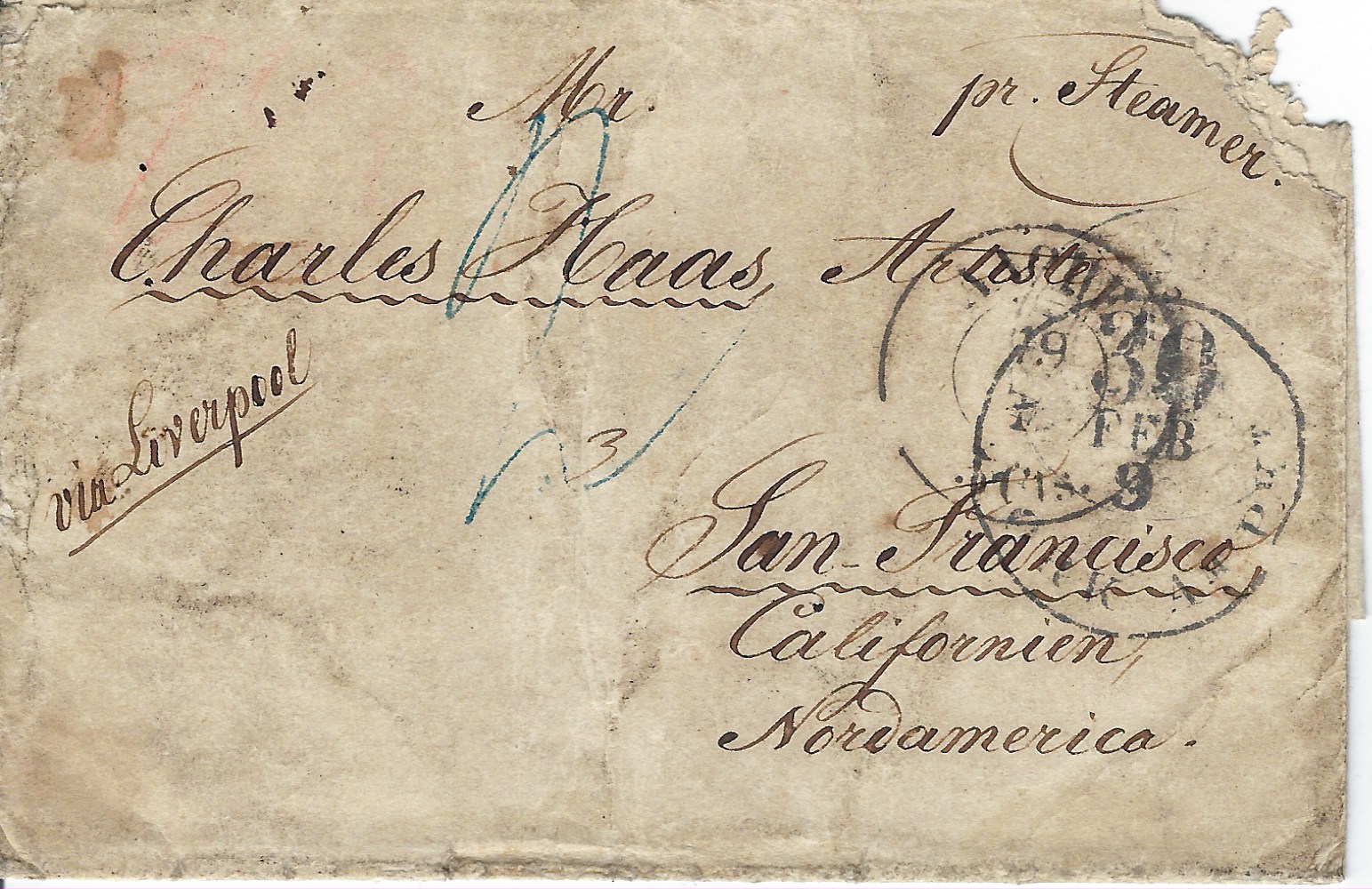 Stamped in "GALENA/ILLs./6.OCT" (The "A" at the end is very hard to see. A small piece from the lower right. Correspondingly, the "s" at "ILLs" is only very faintly visible). Then to New York, postmark "NEW YORK/20.OCT" in red. Then on to Havre, postmark "Havre XX.NOV.1850".
Noticed in handwriting "via New York and Havre - via Strasbourg".

I suspect that the mailbag was opened in "Liverpool" and based on the routing note and this route is also faster than via "Bremen", the letter was sent to France (Havre).

In February 1861, at which time this letter arrived here, letters to California were transported overland by the "Southern Butterfield Route". Since the beginning/end points of this line were St. Louis and Memphis, the letter had to be taken to St. Louis by rail. It left New York on February 9 or 10, 1861.
He left St. Louis by stagecoach on the "Southern Butterfield Route" around February 12-16 and reached San Francisco around March 7-8.
It was "advertised" in the newspaper after 2 weeks, on 22. March 1861, as it had not been picked up at the post office.
Since there are no postmarks of a return, this letter must have been picked up then. 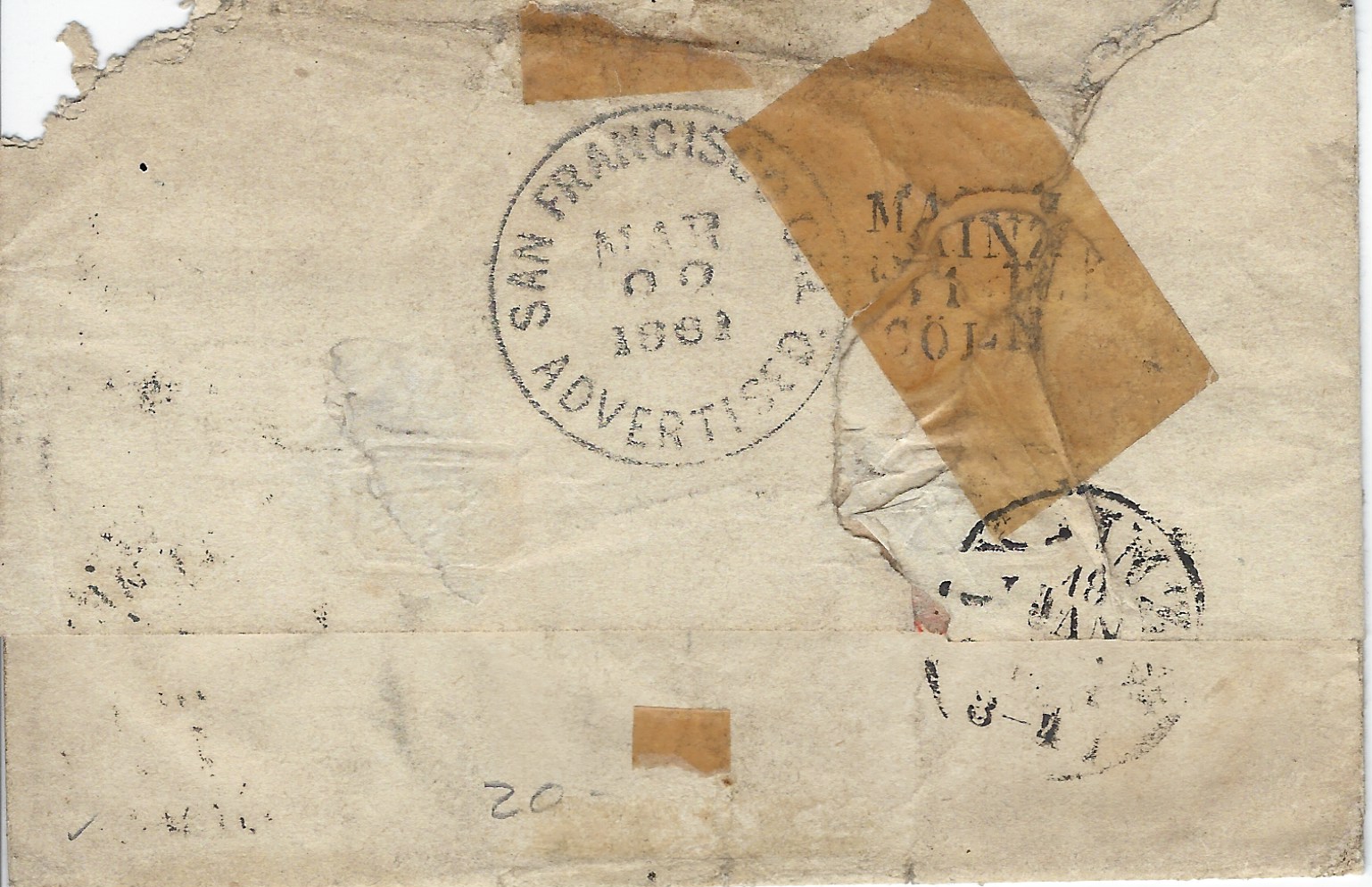 Back: postmark of Mainz, the railroad post office Mainz/Cologne and the postmark "San Francisco, Advertised".