On the way out and home has been worked up. Letter mail to the United States has been processed in the manner customary before the war and also delivered to the mail boat in New York separately for New York DPO and New York Railroads. Registered card closings to the interior of the country, however, have been handled as closed mails on New York DPO because in the past these items had to be closed with special American locks. Letter mail for New York City remained unopened. City mail used to be handled with priority over other mail. According to an information in New York soil now the Dis mail is processed first, so that it does not disturb the New York operation.

The urgent mail has been dispatched to Cherbourg, the non-urgent mail, in addition to the mail destined for Germany and the Nordic empires, has been rejected in Cuxhaven.

In my experience, urgent letter mail to and from America is now considerably stronger than before the war; namely, registered mail from America has increased many times over. The processing of the mail therefore takes more time than before the war. Seaposts that receive more than one day's mail are therefore staffed with at least four forces (one German, one American official, two German conductors).

The ship's management has shown every courtesy to the seapost and has provided it with the sailors required for untagging, reading, etc., (1-4 men) without delay.

IV. Consultation with the Superintendent of Foreign Mails in New York regarding mail delivery to German seaposts.

The Seapost staff reported to the Superintendent of Foreign Mails in New York at 10 a.m. the day after arrival. The reception was cordial. To my question, asked in the course of the conversation, whether the seapost would receive full mail and would be accompanied by an American official, I was told that the decision on this from Washington was still pending. I was presented with a translation of the letter from the RPM to Washington dated December 3, to which P. M. Gen. It was added that the matter could not yet be clearly overlooked and would therefore have to be examined further. The Superintendent and the other officials present assured me, however, that New York was in favor of the establishment of German-American services. If the approval from Washington was received in time, the official Quigley would accompany the seapost, likewise the steamer would receive the full mail for all of Europe. In the absence of the order, the official would not be able to travel, but the seapost would receive the mail arriving after the departure of the steamer France to Le Havre - from New York 4. 2. - thus a one-day mail for Germany. The remaining mail would have to be given to the steamer Berengaria - from 7. 2. - which would deliver it in Cherbourg and Southampton one day earlier than the steamer Albert Ballin. I declared that I was not satisfied with this and pointed out that with similar schedules, the American seaposts from Hamburg and Bremen always received the full German and foreign mail. It would therefore only be fair play if the seaposts now established in New York were to be supplied to the same extent with all mail for Germany and foreign countries. In the course of the conversation, which was otherwise conducted in English I finally expressed the intention of going to Washington myself in order to ask the responsible gentleman, Mr. Edwin Sands, whom I had known personally in the past, to bring about a decision in the matter, which had been pending for a long time. I received the promise that an American official, who had free travel on all railroads, would go to Washington and provide definitive information. The gentlemen, however, wished to see the sea mail rooms on the steamer Albert Ballin. By agreement with the ship's management, the gentlemen were invited to do so on Jan. 30. The officials were appreciative in every respect of the sea mail rooms, which had been freshly painted in New York. On the other hand, they refused to allow the American officials to occupy the post office cabin provided for two officials, because neither its location within the 2nd class nor its simple furnishings would meet reasonable requirements. It is an outside cabin located on the lowest living deck of 2nd class, which is less comfortably furnished than that of the German conductor. The German official made the same complaint. For myself, the Hamburg-America Line had provided me with a cabin in 1st class. It will be advisable to persuade the Hamburg-America Line to provide a better situated cabin, which would then also have to be equipped like a 1st class cabin. In the following days I repeatedly spoke to the Superintendent of Foreign Mails, but only learned on the day before departure that the two Hamburg steamships would now have joint seaposts and that they would always receive full mail. Before that, I had received the telegraphic inquiry from Washington to the the RPM concerning the manning of American ships with German officials. The Superintendent also mentioned that the steamers Resolute, Reliance, and Cleveland would now also be manned with common seaposts, if the ships would fly the American or even the German flag instead of the Panama flag. For the rest, more details were, under which conditions the joint maritime service would be carried out on German and American ships could not be obtained in New York.

In order to promote the establishment of joint seaposts, I wrote a small article for the New York newspapers on January 28 in consultation with the New York general representative of the Hamburg-Amerika-Linie, to the effect that the first seapost Hamburg-New York arrived with the steamer Albert Ballin and rejected 2,288 sacks. The German personnel were primarily determined to sort mail for Germany, but in the absence of the American official they also sorted mail to the interior of the United States, etc. The article has appeared in most New York newspapers, though abridged here and there. I enclose the clipping from one newspaper. I also note that the representative of the Hamburg-America Line requested the addition of my name, because the Hamburg-America Line in New York could not yet publish anything that would resemble an extraordinary advertisement.

J'l of Commerce Jan. 30. 1925
Operation of the German sea post service from Hamburg on German steamers, which was suspended in 1914, was resumed through the efforts of the Minister of Posts of Germany on the westbound trip of the steamer Albert Ballin, which arrived Tuesday from Hamburg with 2,288 bags of mail. Albert Dahlke chief inspector of the German Postal Service, is in charge of the inauguration of this new facility and heads a staff of three clerks from Hamburg. It is hoped that in the near future American sea post clerks will take charge of the sorting of mail intended for America. The sorting and distribution of mail during the ocean voyage expedites its delivery about twenty-four hours. It is planned to continue this German sea post service from Hamburg on the next sailing on the Deutschland.

"Postgeschichtliche Blätter Hamburg", Issue 31/1988
Note: The Post Museum at Stephansplatz in Hamburg mentioned at the beginning no longer exists since 2009. 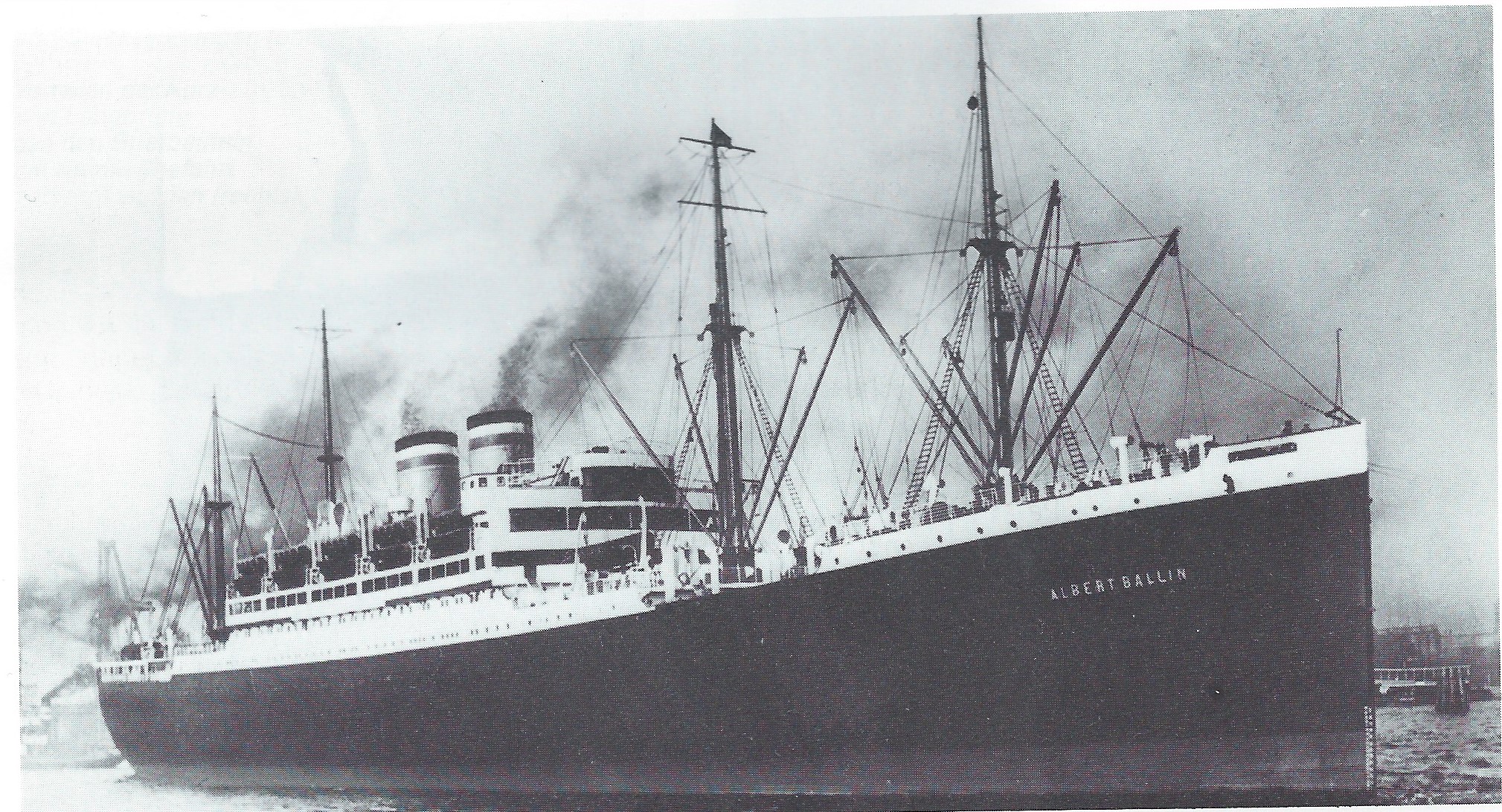 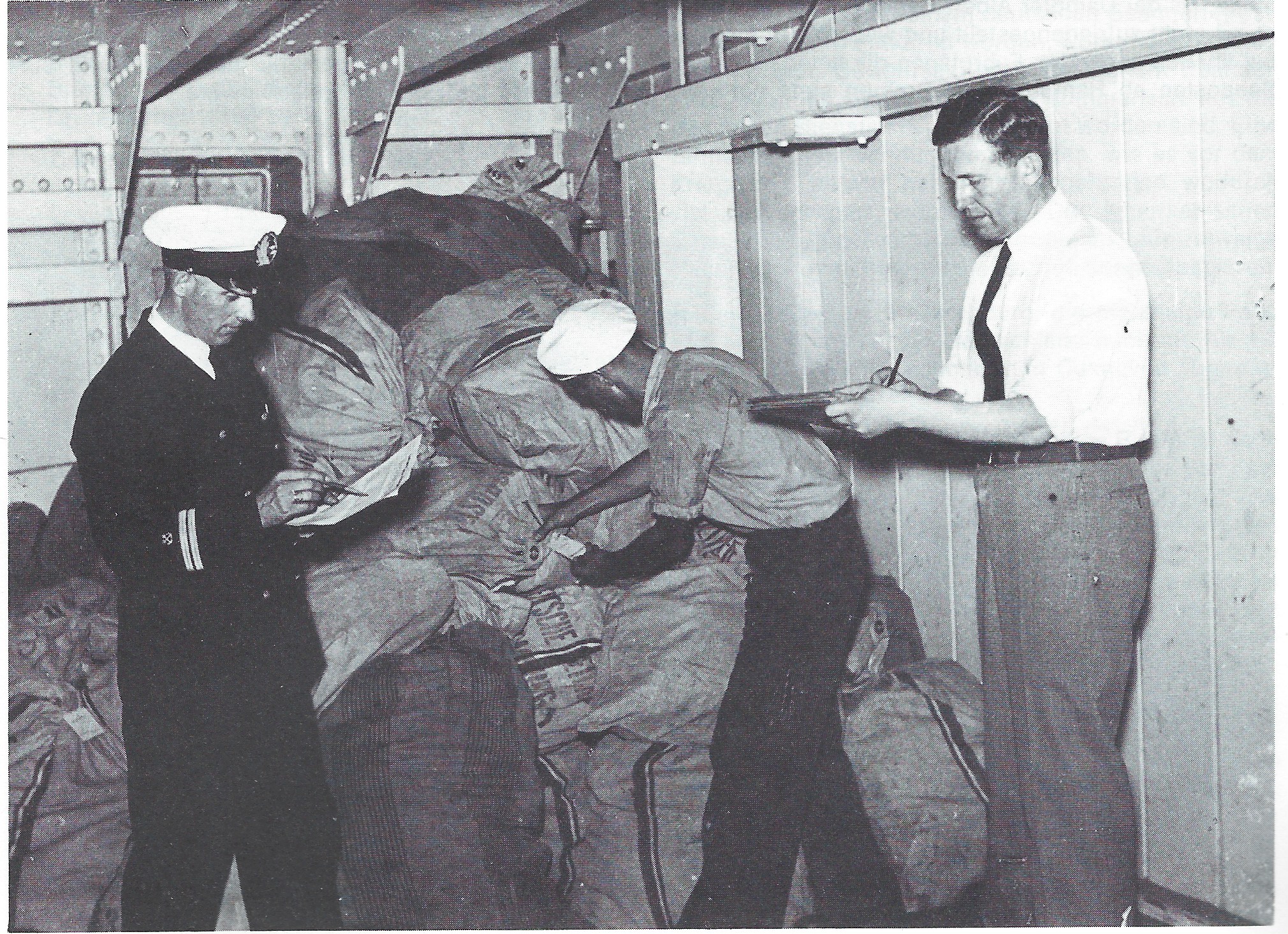 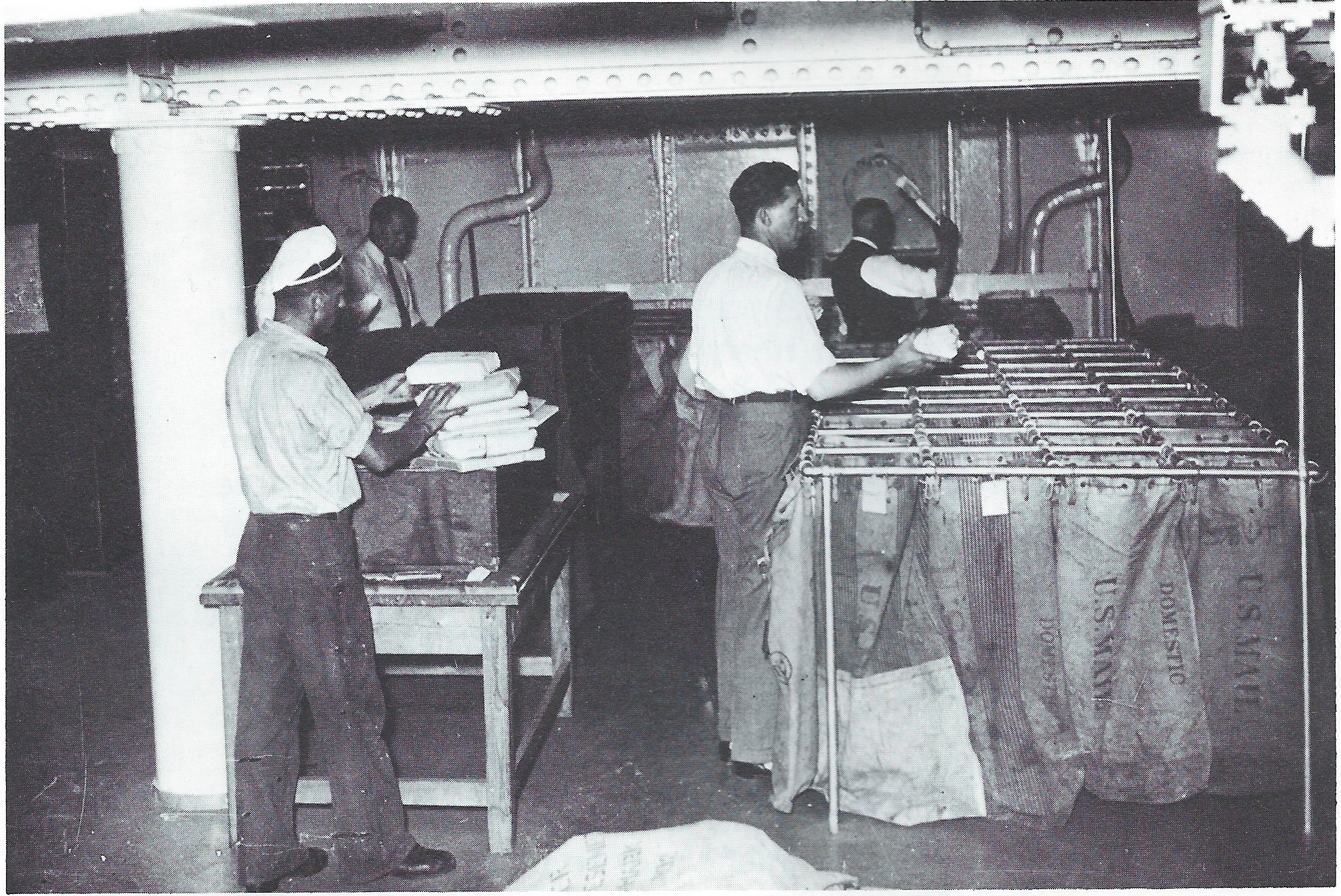 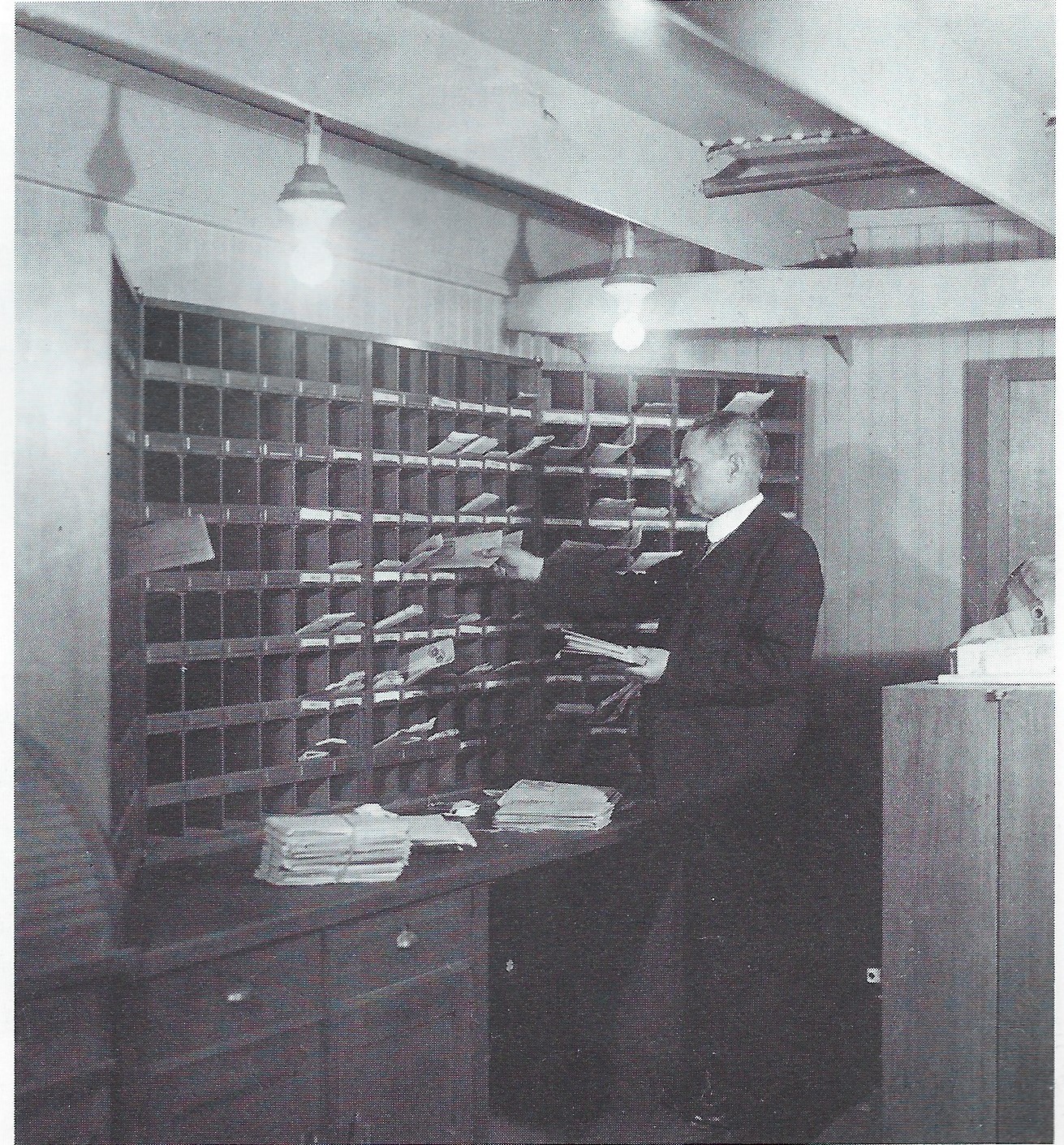