I would like to describe here, on the basis of some documents, which I could collect, a perhaps typical example of an emigration from Germany to the USA in the 1920s.

It begins in 1923, when Mr. Egon Ziechmann decided to emigrate to the USA at the age of 25. Probably for economic reasons, because 1923 was a time of high inflation. In addition, he came from a small village, Mupperg, district Sonneberg, which today is a part of the municipality of Föritztal. It is located in southern Thuringia close to the border with Bavaria.
He sailed from Hamburg on 27 September 1923 on the HAPAG steamer "Albert Ballin", which reached New York on 07 October 1923.
The district of Sonneberg is characterized by agriculture and forestry through dairy farming and root crop cultivation. This will not have been much different in the 1920s.

A special feature is that 3 years later Miss Linda Klug, also from Mupperg, emigrated, to Cleveland, Ohio, like Mr. Ziechmann.
She also sailed on a HAPAG steamer from Hamburg, the "Deutschland", on December 03, 1926, and reached New York on December 13, 1926.
They must have known each other and "colluded" since they married on May 21, 1927. The year of birth for Mr. Ziechmann is given as 1898 and for Mrs. Linda Ziechmann ( born Klug) the year 1904. On January 5, 1928 their daughter Charlotte was born to them.

I also found out that Mr. Ziechmann became a citizen of the USA on September 12, 1930. He worked, shortly before the second World War II, at the "New York Central Railroad". In the meantime they lived in Euclid, Cuyahoga County, Ohio.

I became aware of the two through a "Passage Deposit Receipt" dated May 14, 1937 for a passage to Germany for all three of them on 15 July 1937 with the HAPAG steamer "Deutschland" to Hamburg. I suspect a visit from relatives.
On the document it says third class, but in the passenger list of the trip they are listed in tourist class.
Back they went on September 30, 1937 from Hamburg with the HAPAG steamer "Hamburg" and reached New York on October 08, 1937. 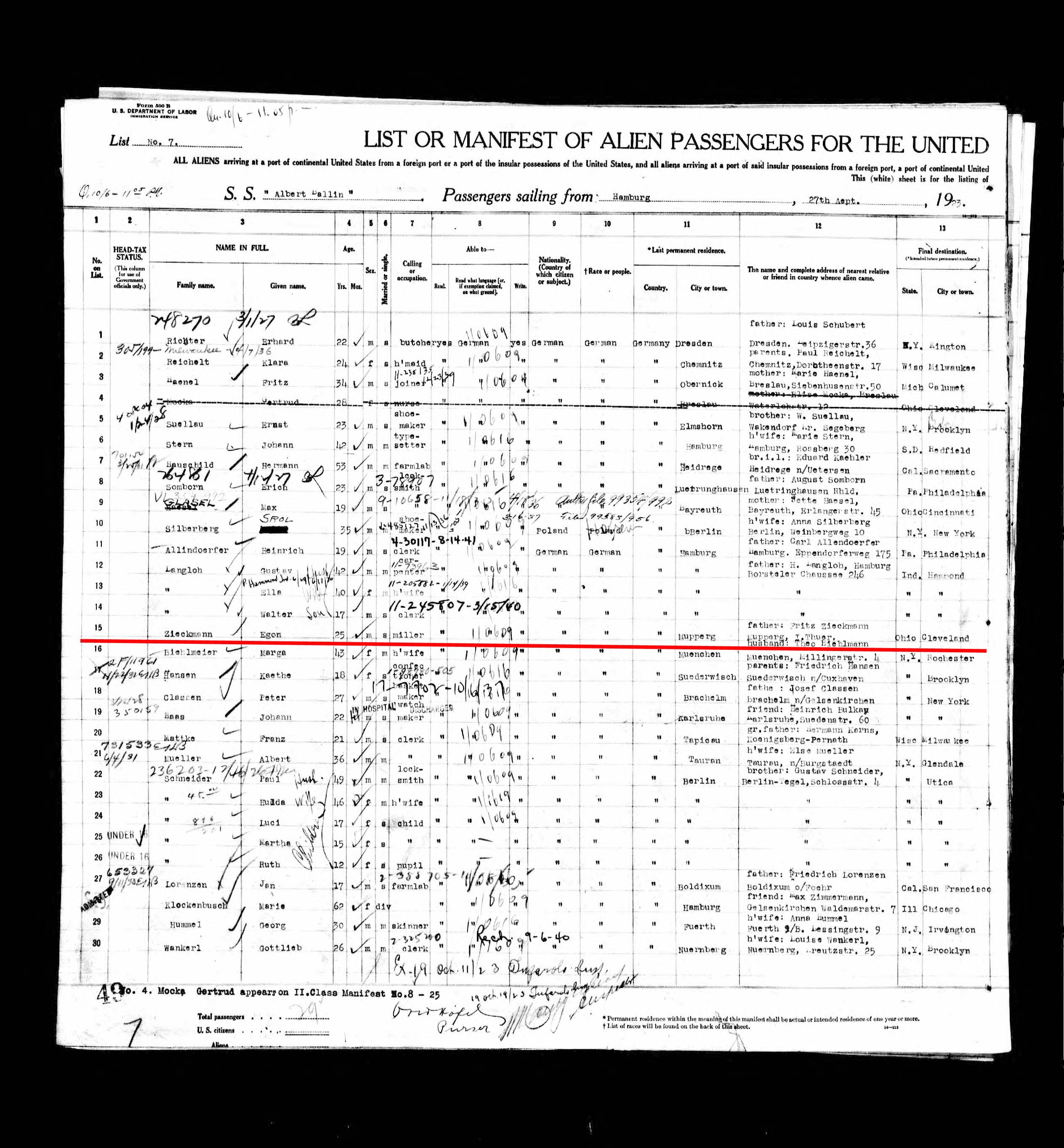 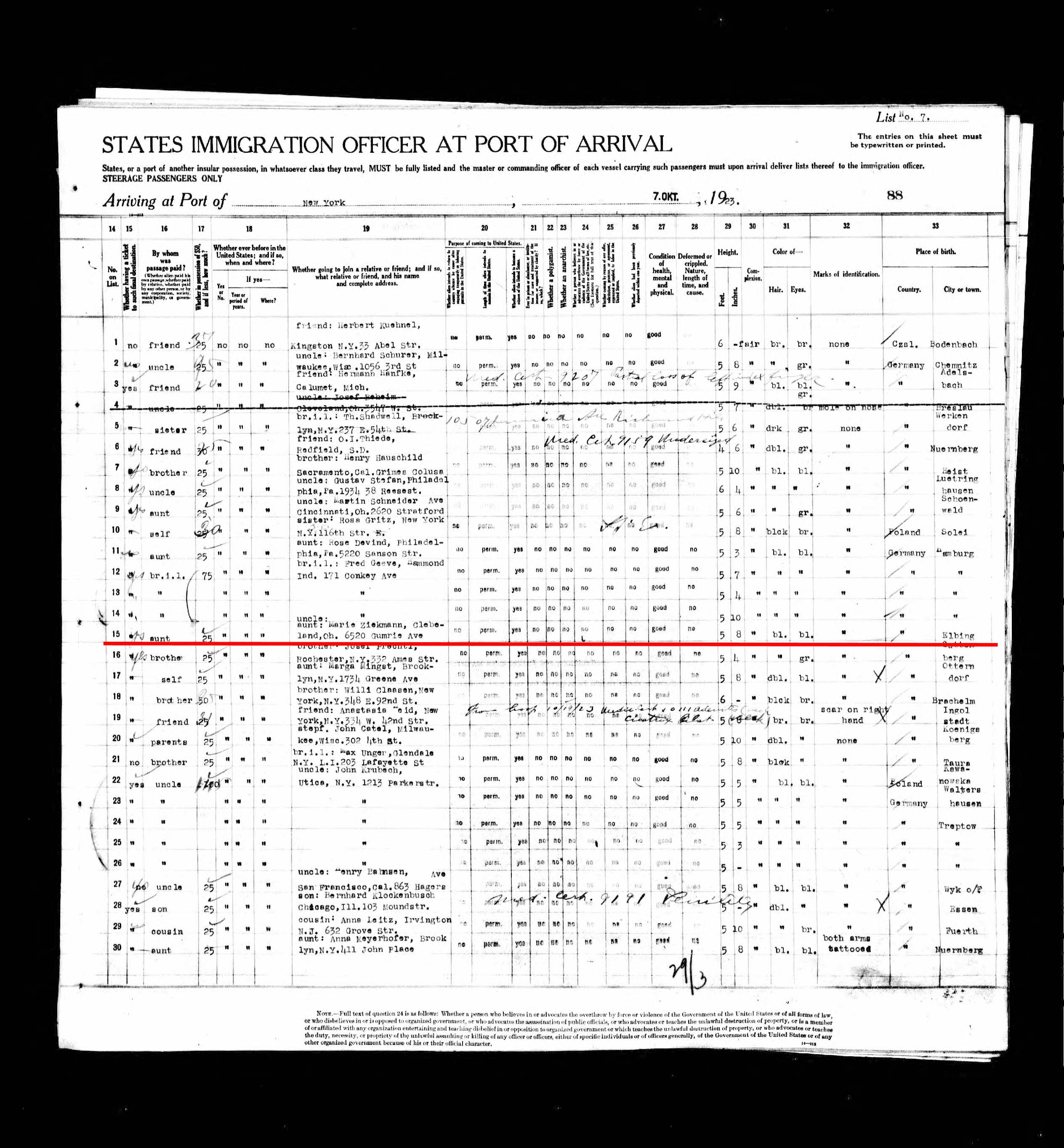 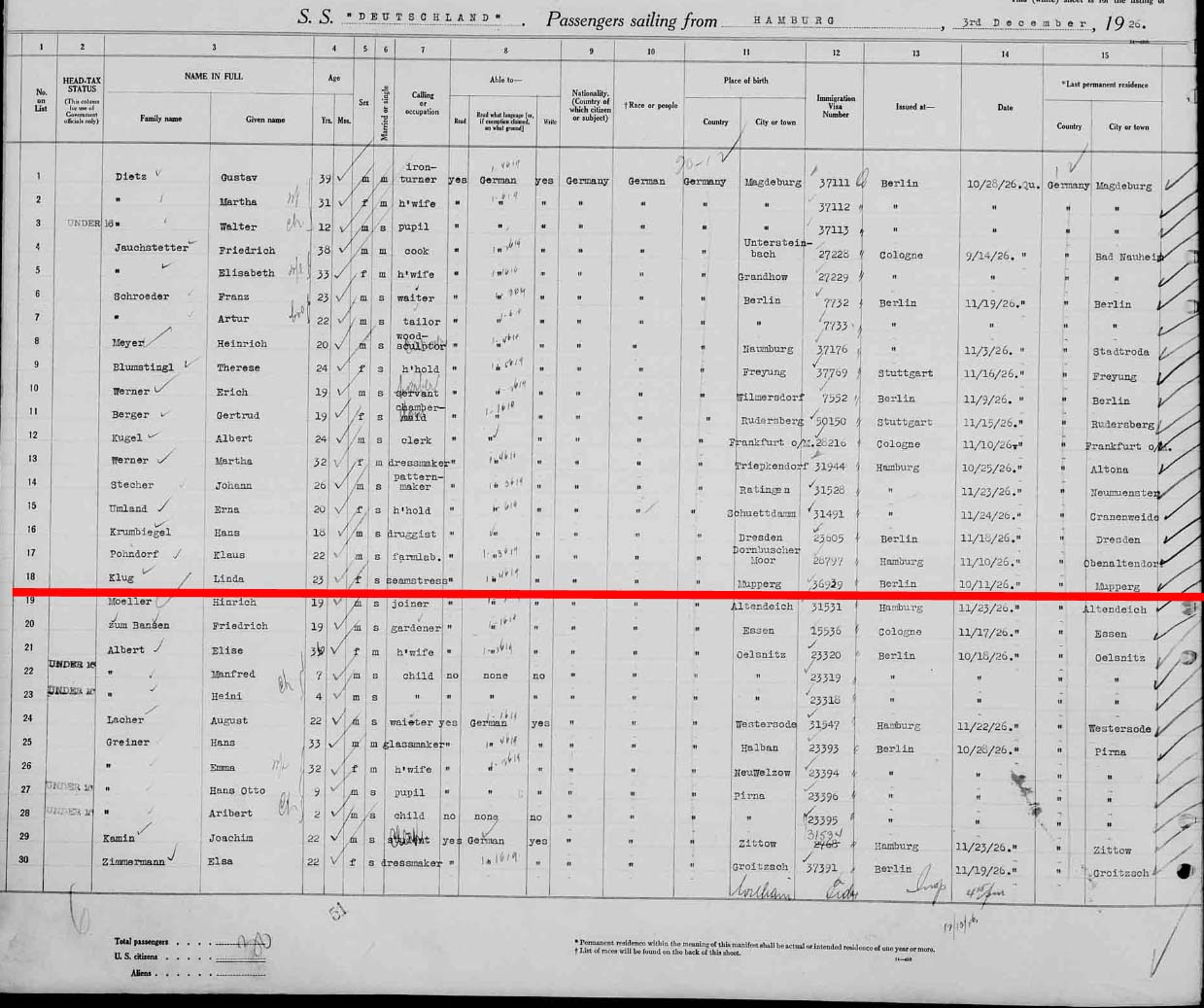 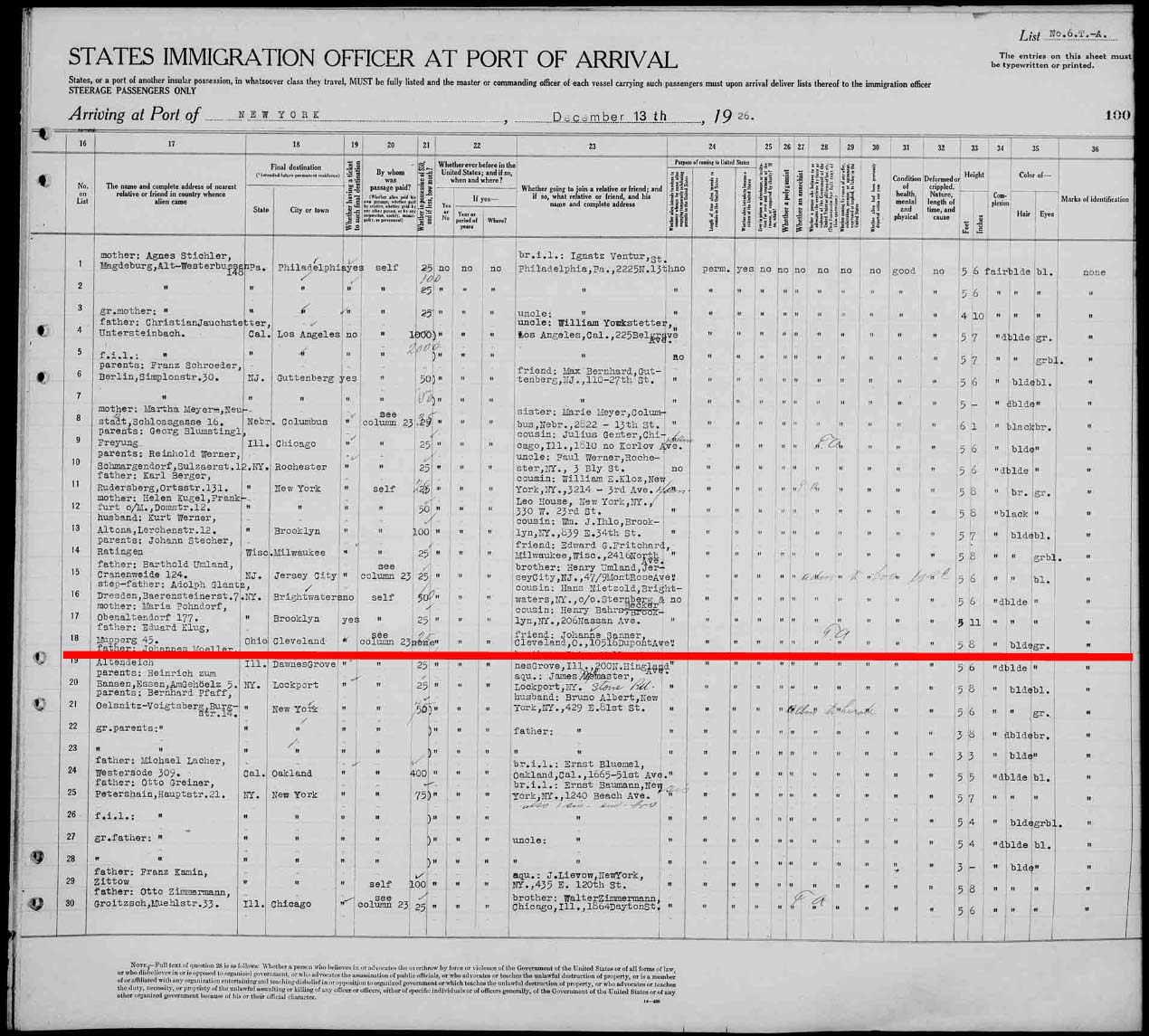 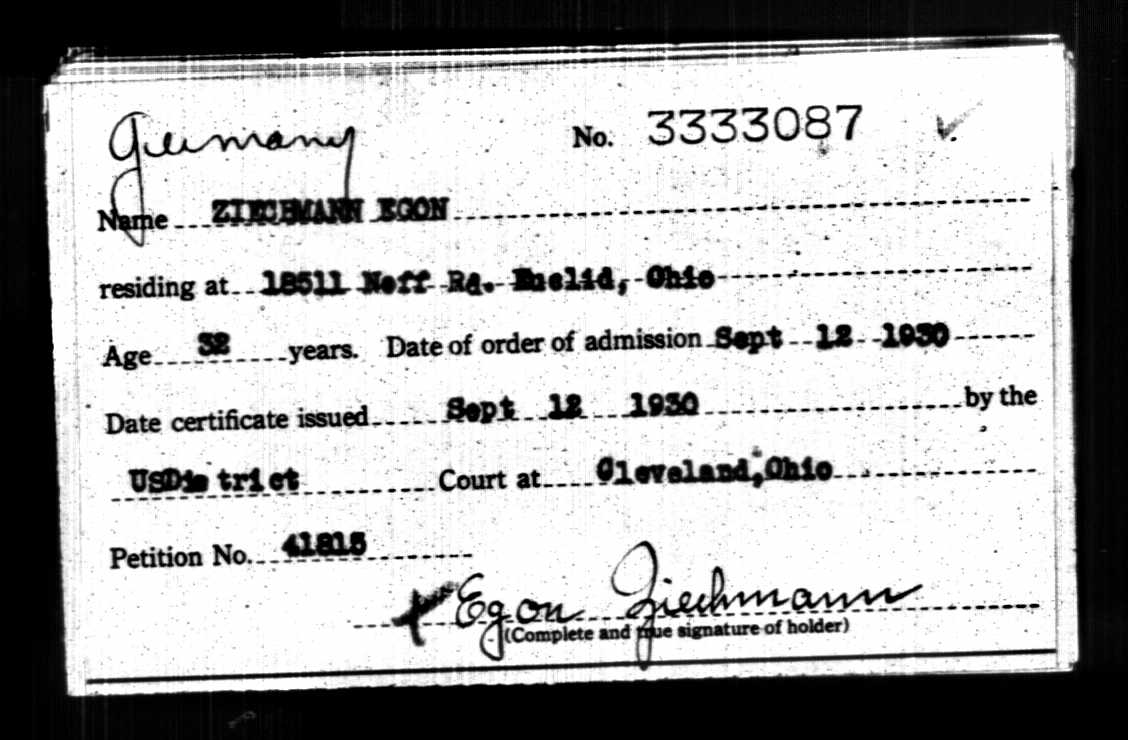 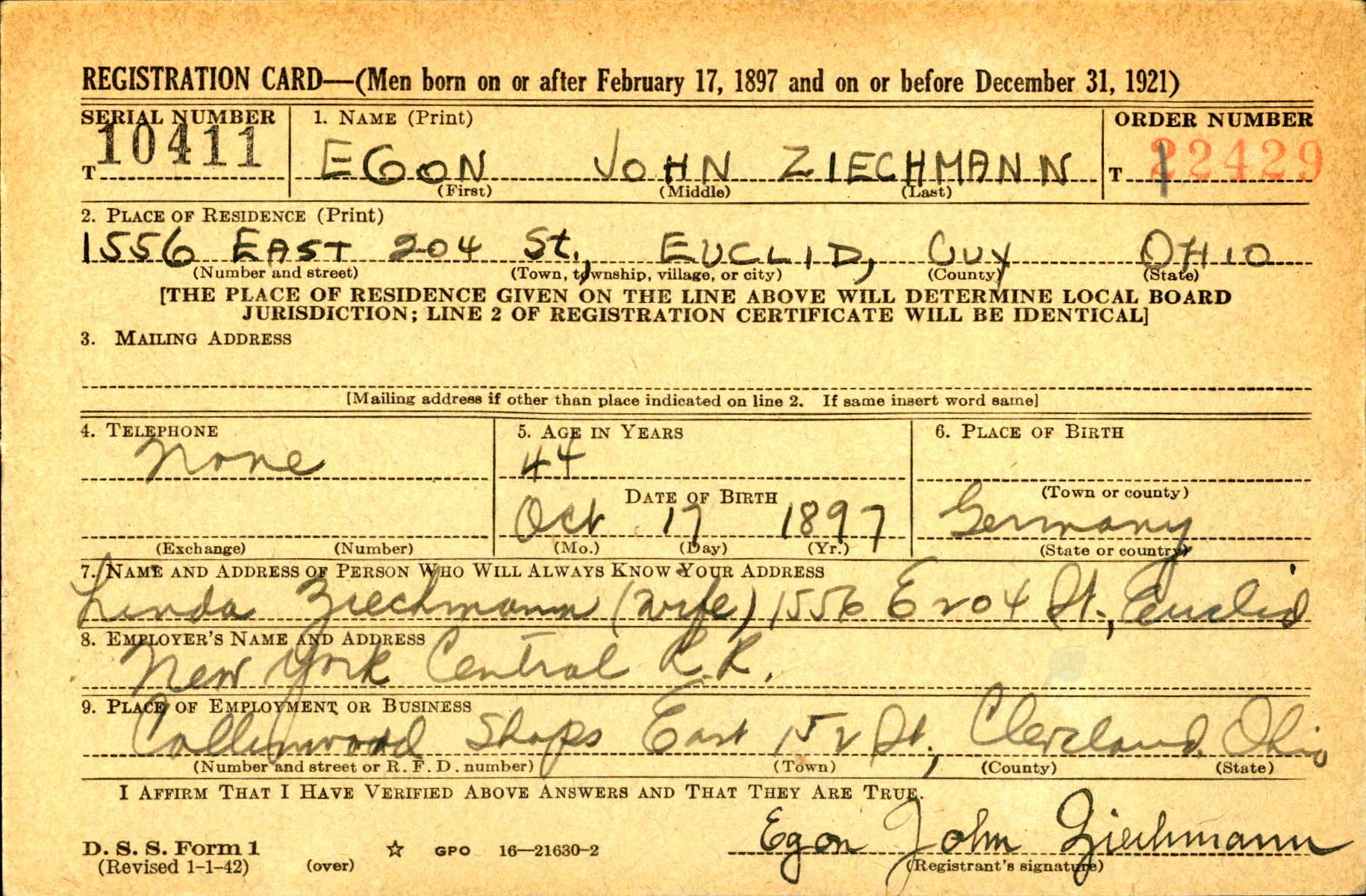 Second part of the list.
Document on the naturalization to the USA of Egon Ziechmann dated September 12, 1930.
"Registration Card" at the outbreak of WW II by Egon Ziechmann. The employer, the "New York Central Rail Road", is also entered. In addition already the place of residence in Euclid. 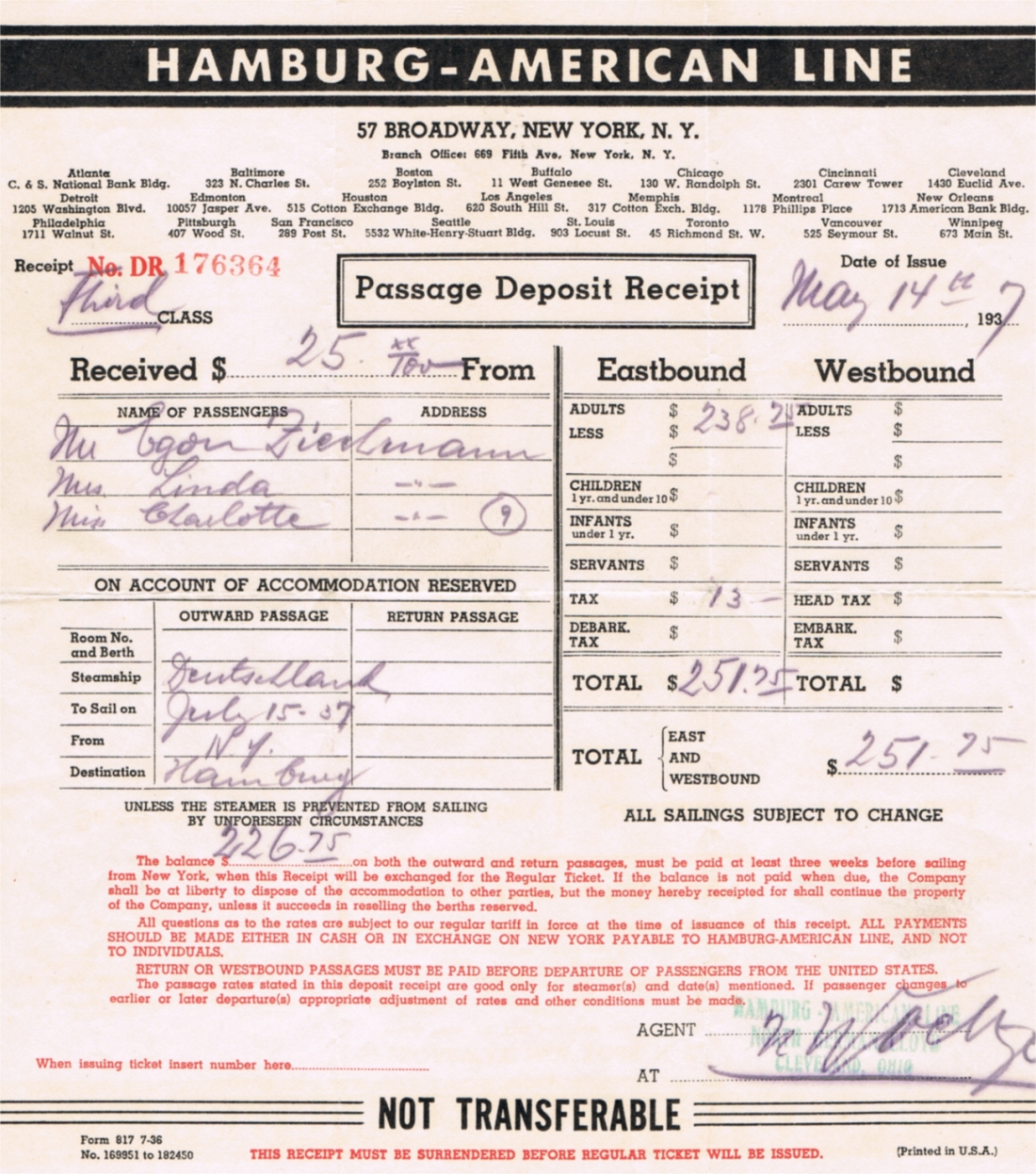 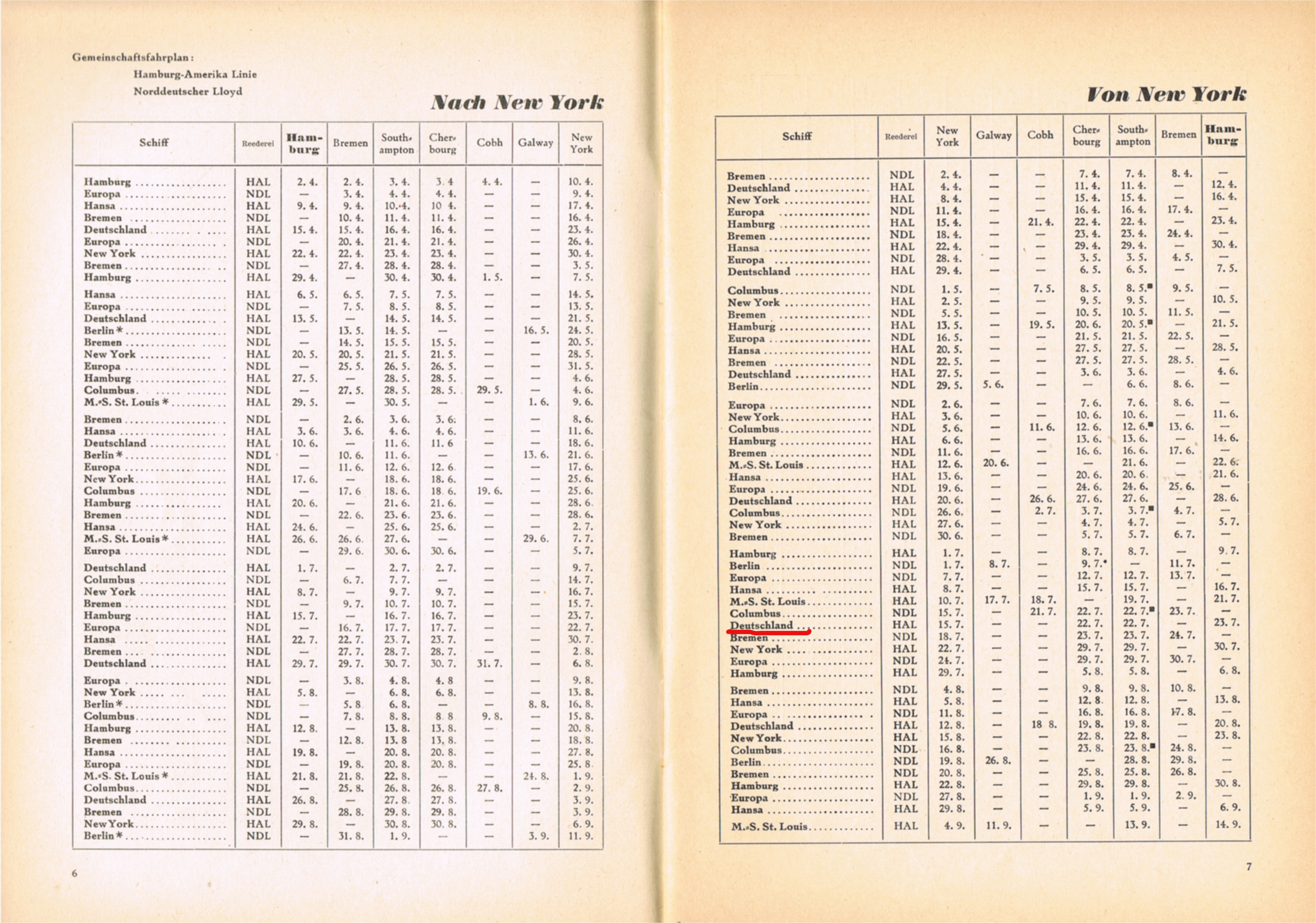 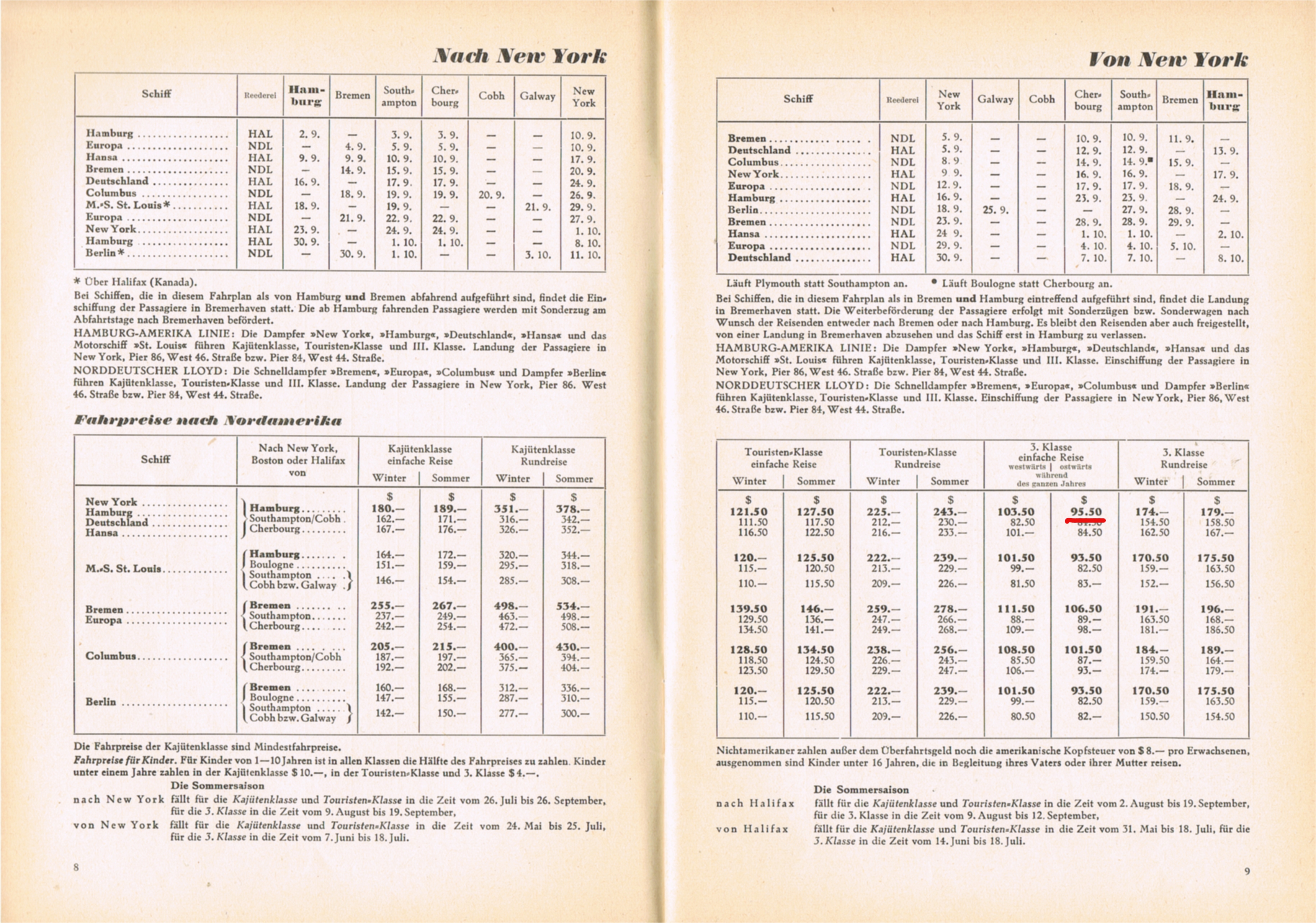 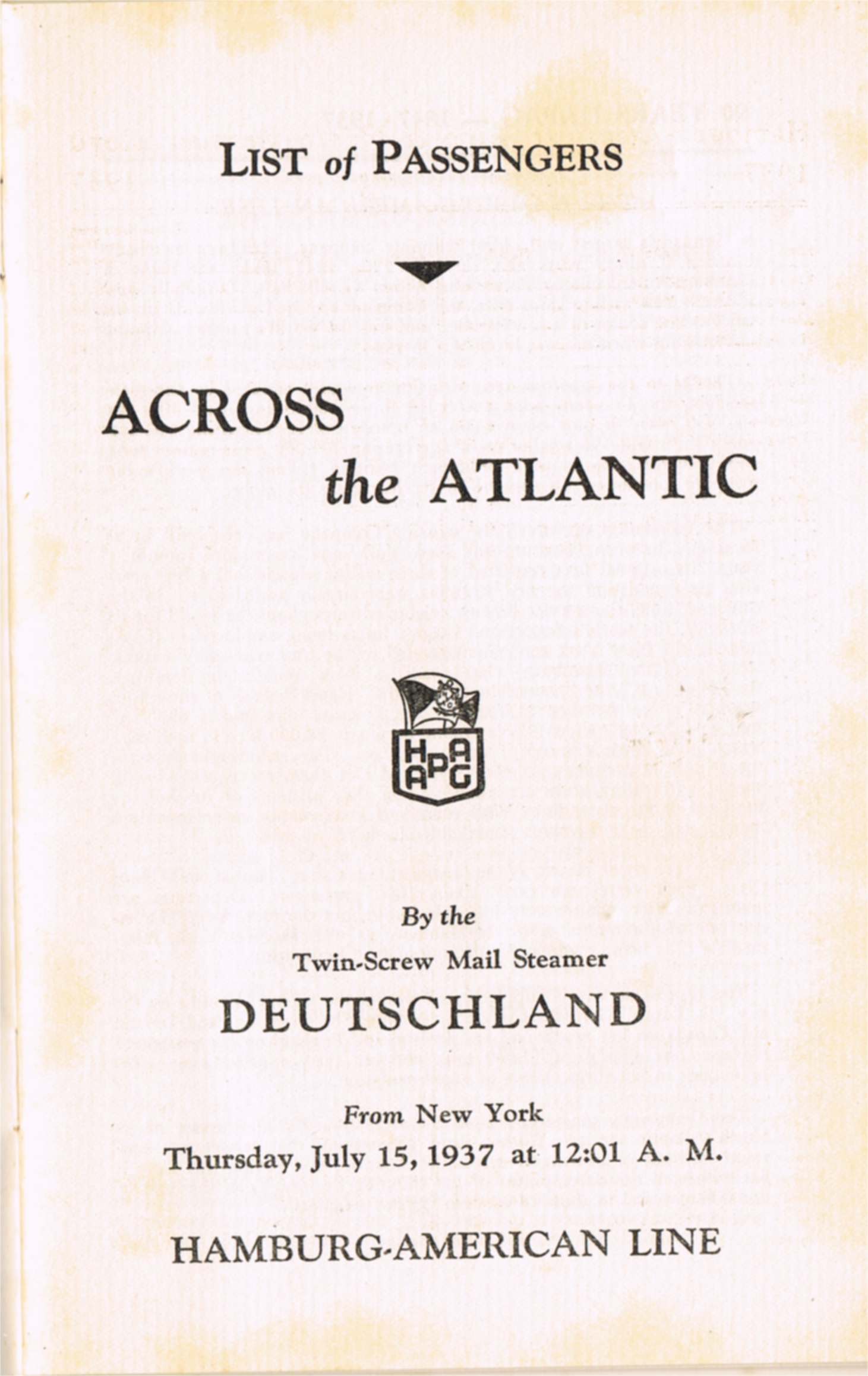 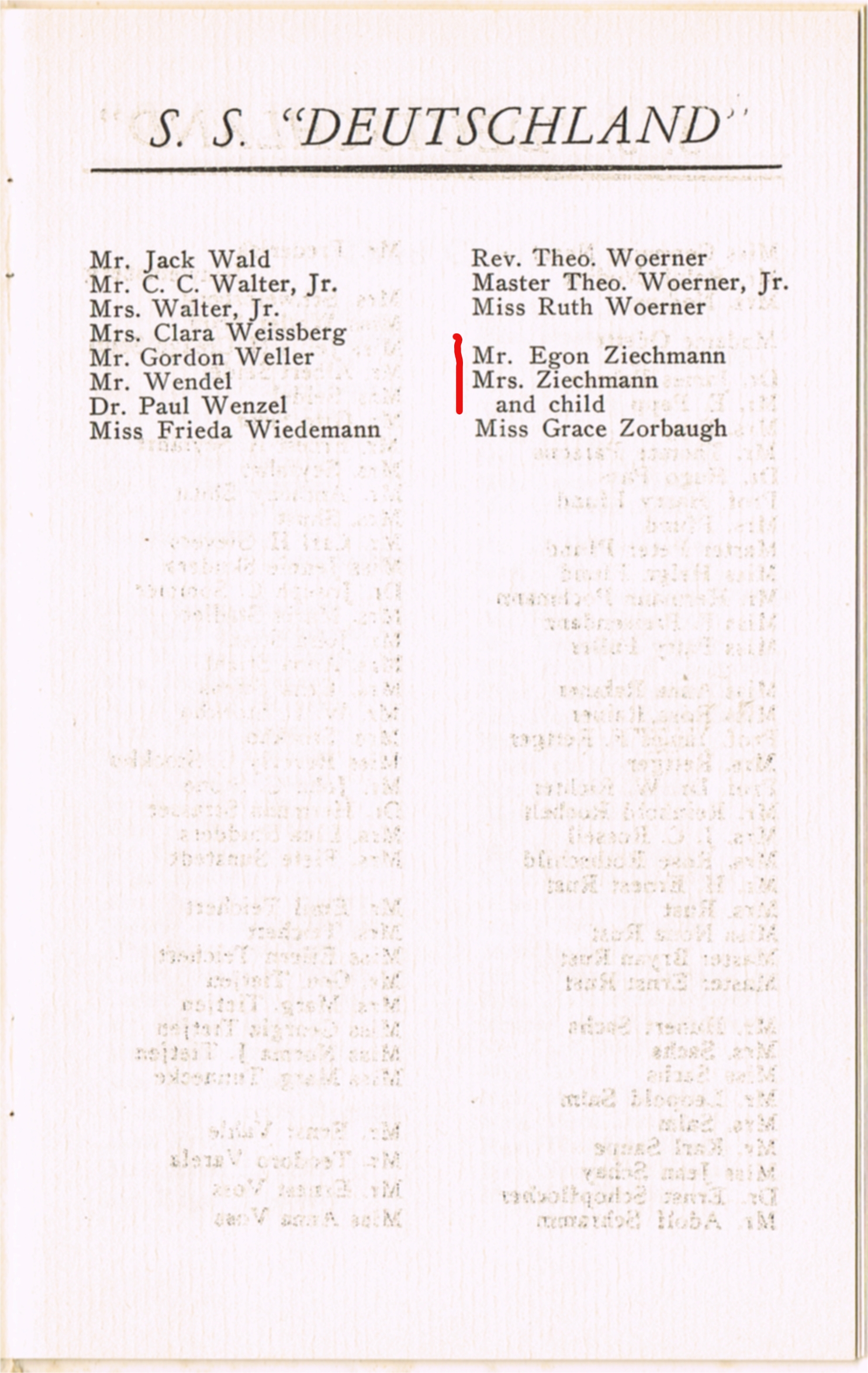 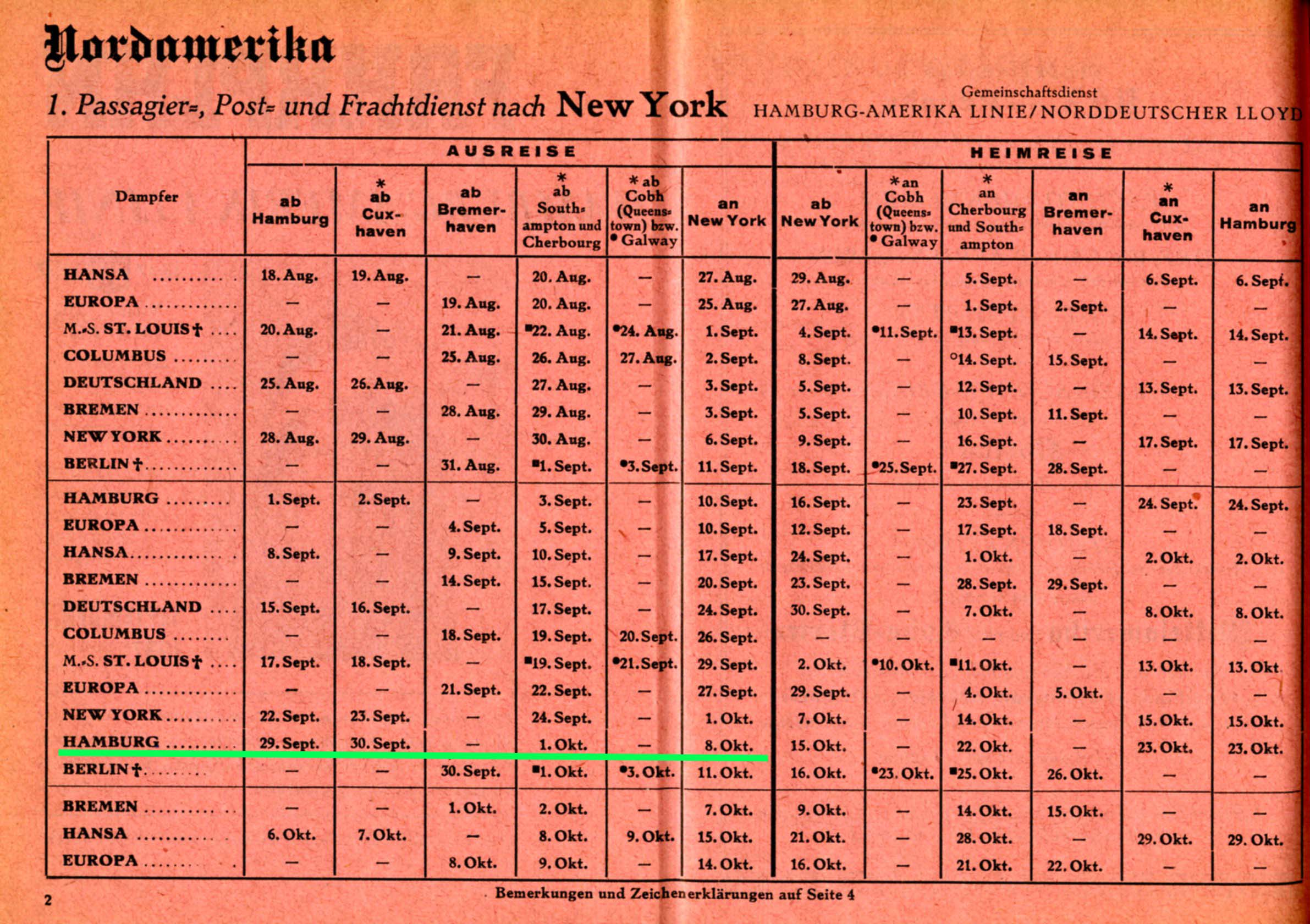 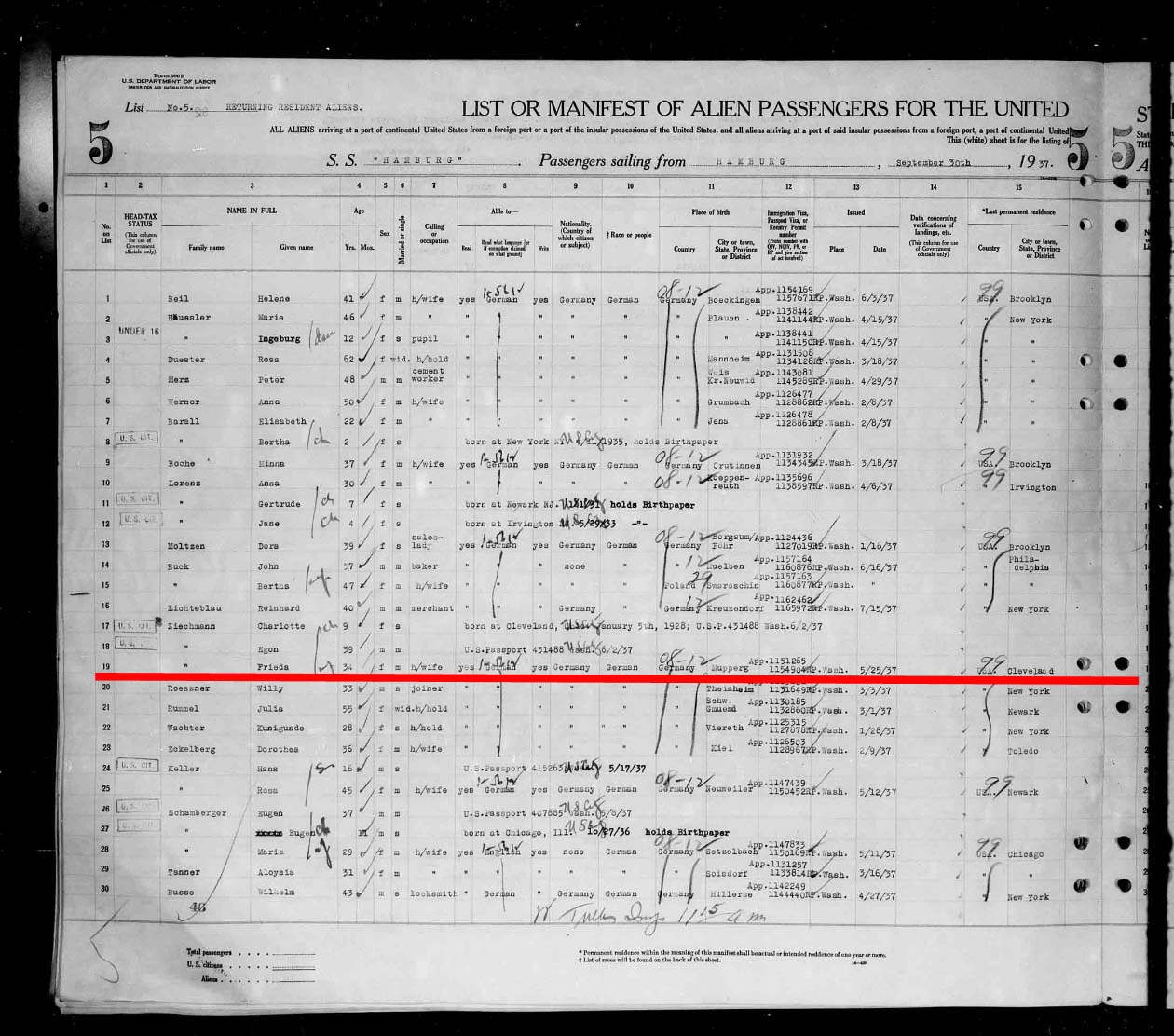 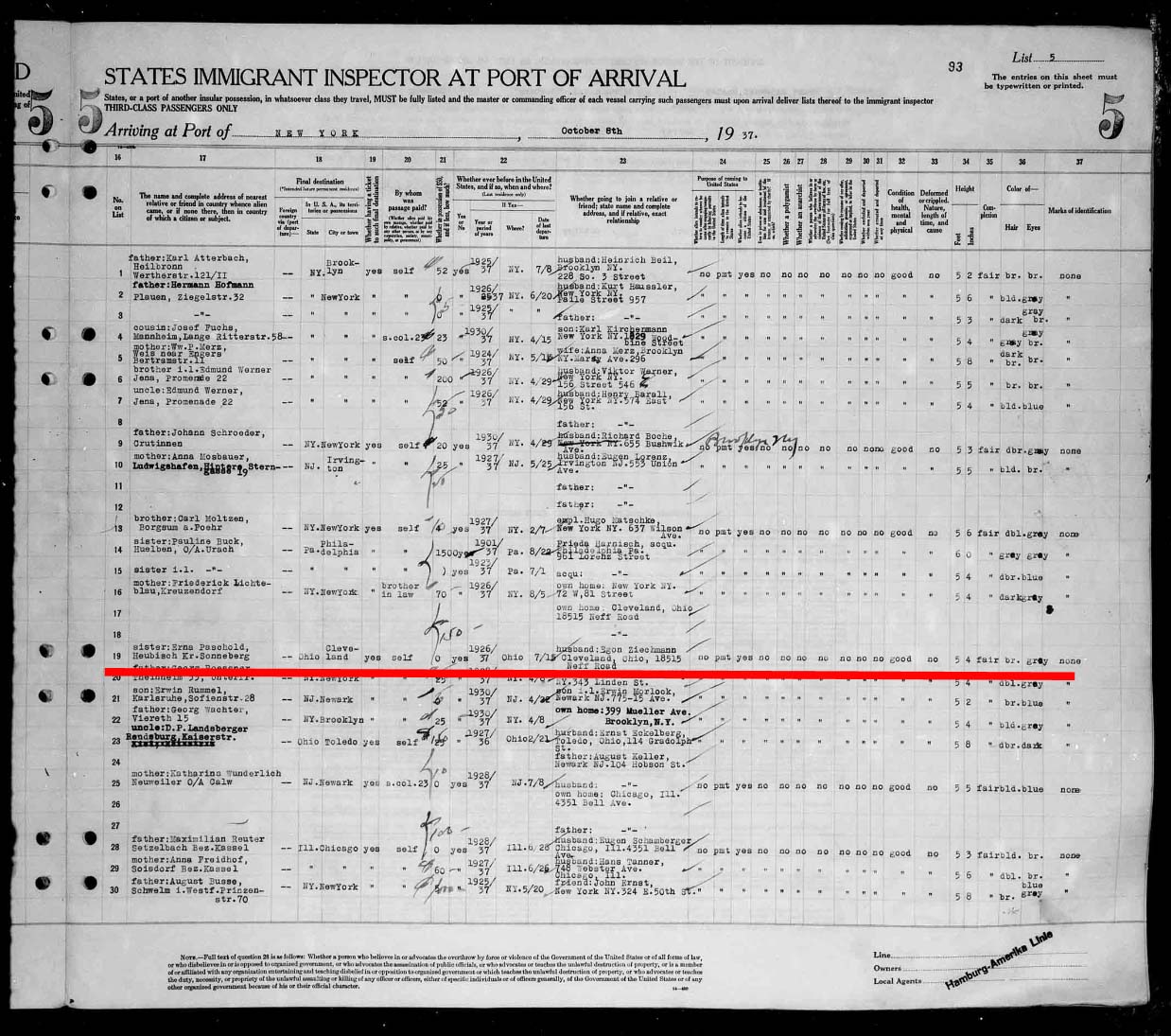 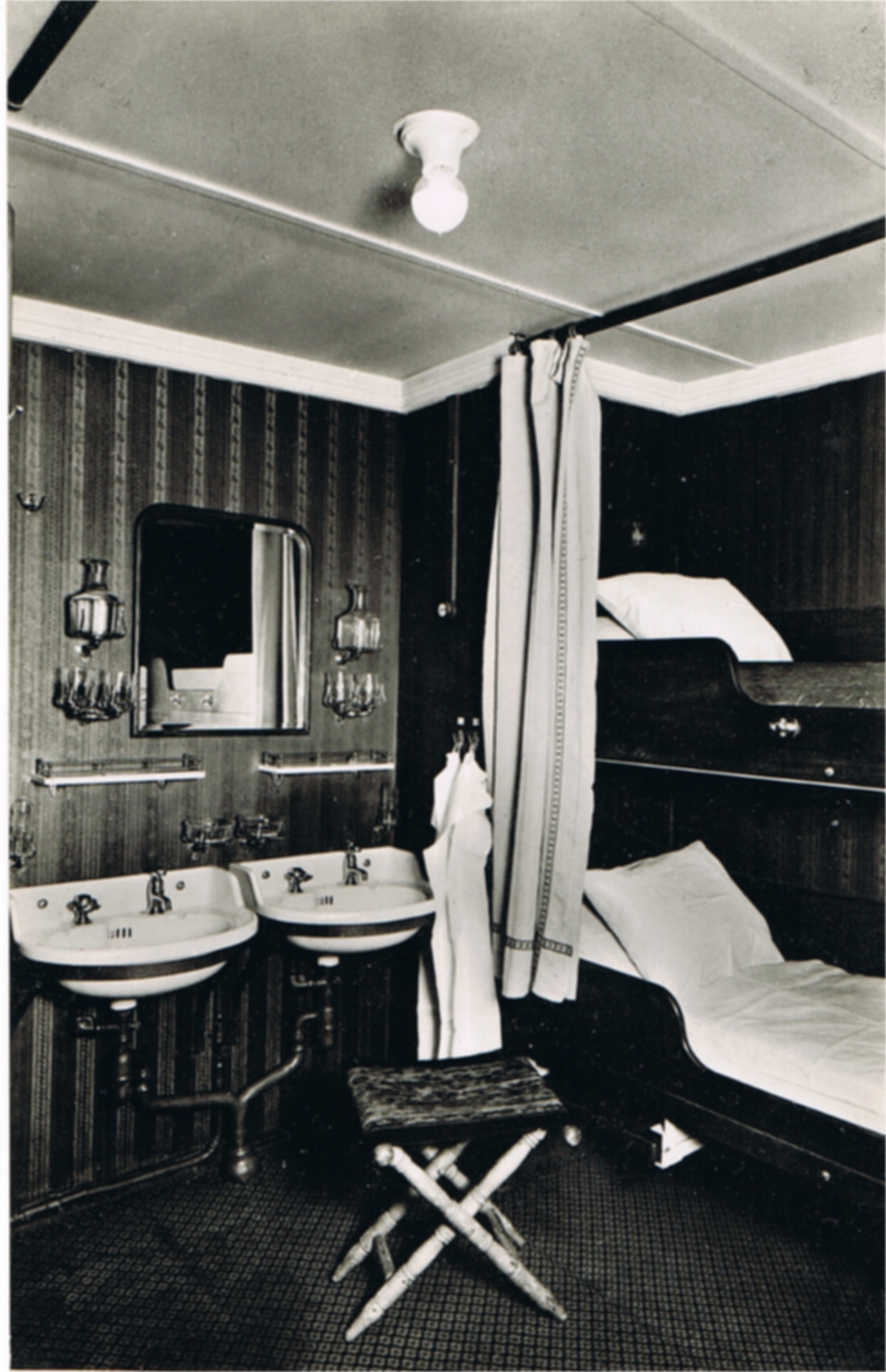 List of passengers who arrived with the "Hamburg" from Hamburg on 09 October 1937. On the list also the Ziechmann family (Linda now calls herself Frieda).
Second part of the list.
Tourist class chamber on HAPAG ships between Hamburg and New York in the 1930s. 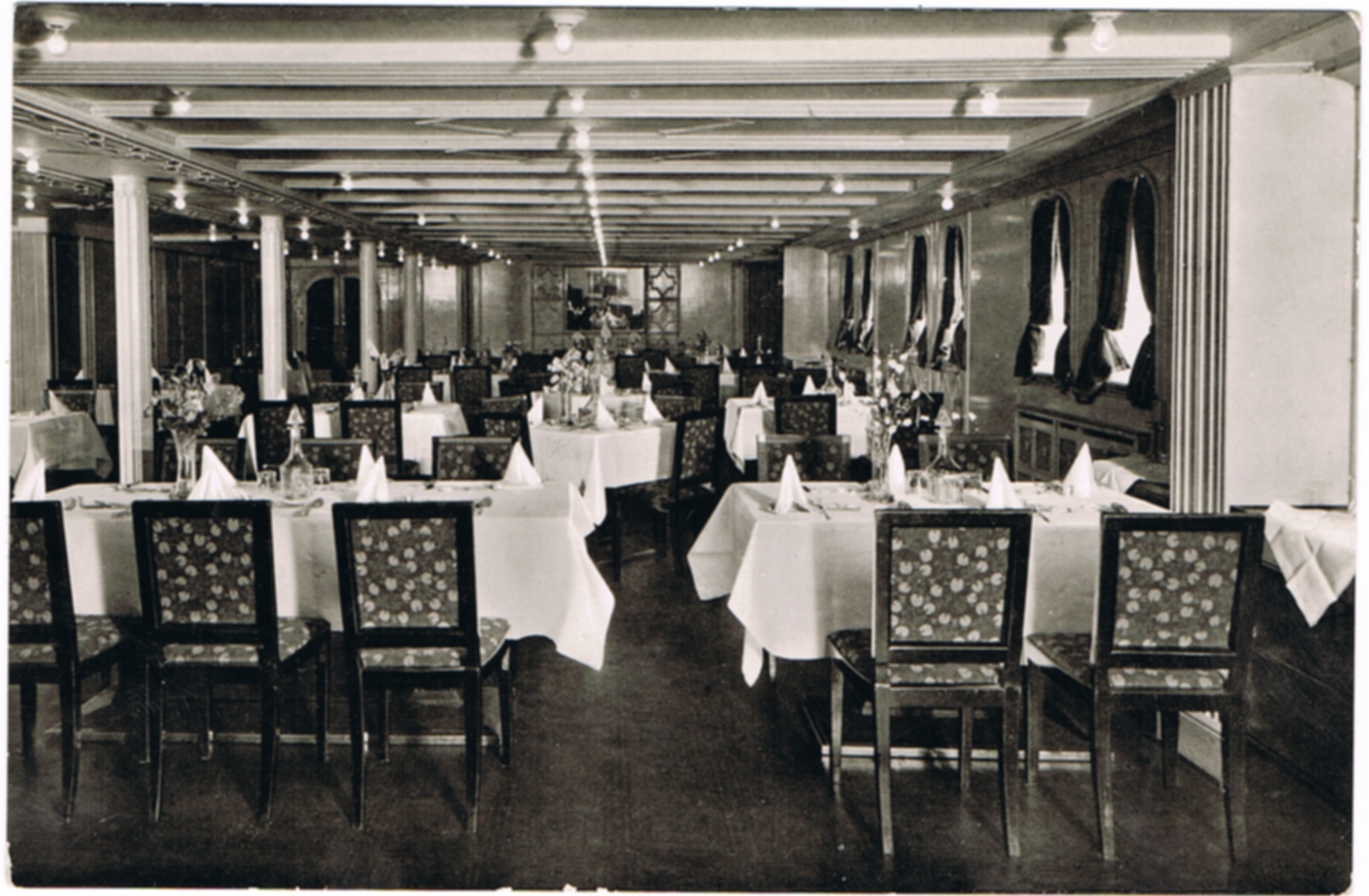