Who is interested in seapost (US Seapost): I have to give away a part of my covers of the US Seapost (84 pieces). In the 54th auction at the auction house "Christoph Gärtner" (lot no. 7753). Is now in post-sale (unsold lots) with the possibility of a lower bid.

These lots are already online and can be found here. To the auction house Christoph Gärtner


I am compiling a list of the voyages of the HAPAG ships between Hamburg and New York. So far I have finished the years 1869 to 1875 and they are available for download here: Schedule HAPAG, Hamburg - New York 1869 - 1875

I am looking for scans of postmark strikes

I am looking for scans of postmark strikes of the " N.Y. & CANAL ZONE" Seapost. It is about this one:

Since the literature on this postmark is not informative enough for me, I would like to try to bring "some light into the dark".
Please email them to this address: jkuseler(at)wtnet.de

300 dpi would be good. And thanks for the efforts!


Hello! Nice that you have found to my homepage! I think that you are probably interested in philately, since this is in the domain. Then you are right here.

As you will quickly notice (almost) everything revolves around the USA. A large part around the sea posts (until 1941) and around the Canal Zone. An exception is the HAPAG. If you disregard the "Deutsch Amerikanische Seepost/US German Seapost", in which it was involved.

But it all started with HAPAG - I'm a citizen of Hamburg - and that was followed by the "US German Seapost". After some time I extended that to all US Seaposts. And a greater interest in the Canal Zone developed.

If you click through here, you will, I hope, discover one or the other interesting thing.
I hope you will enjoy it! 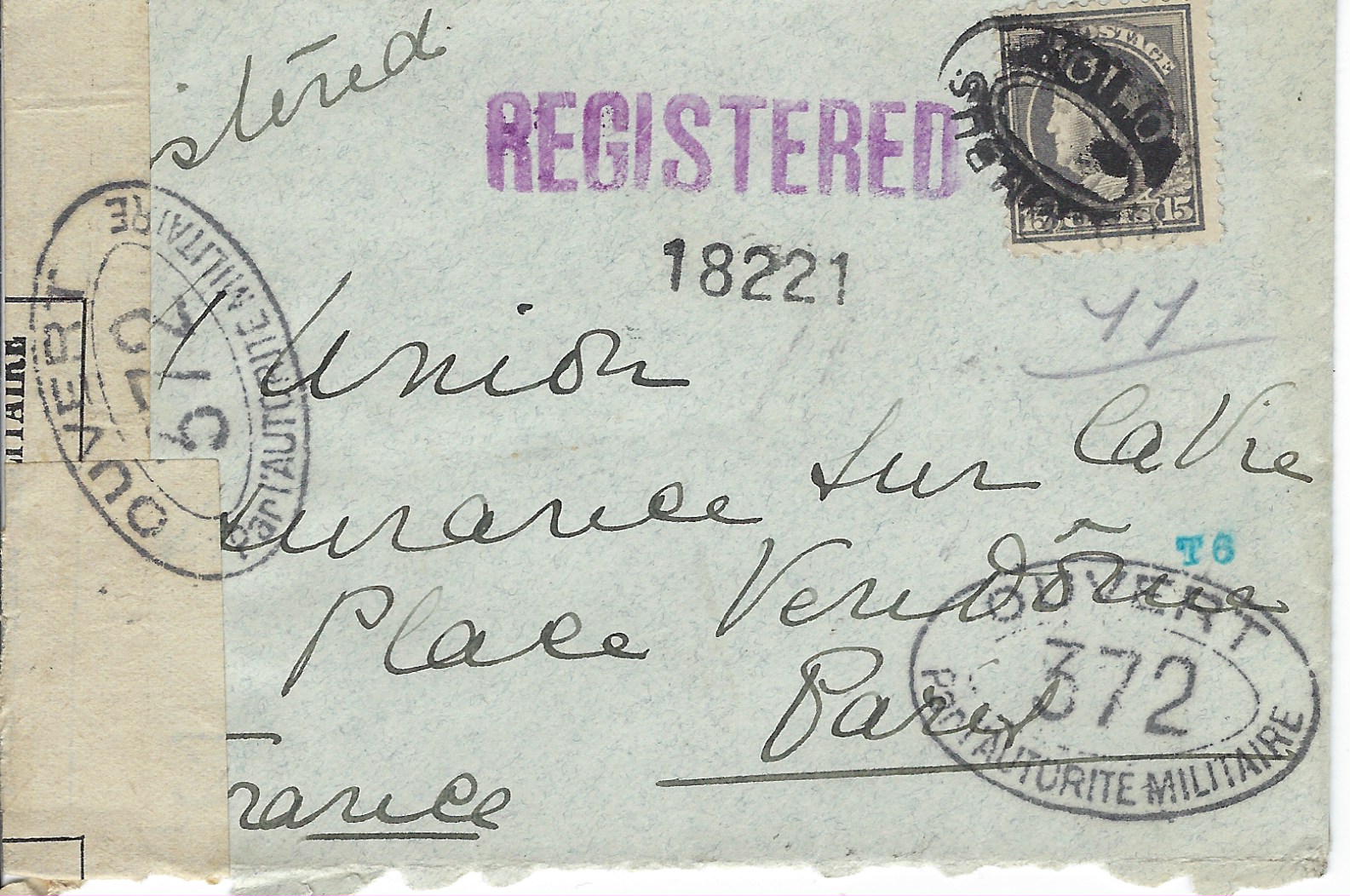 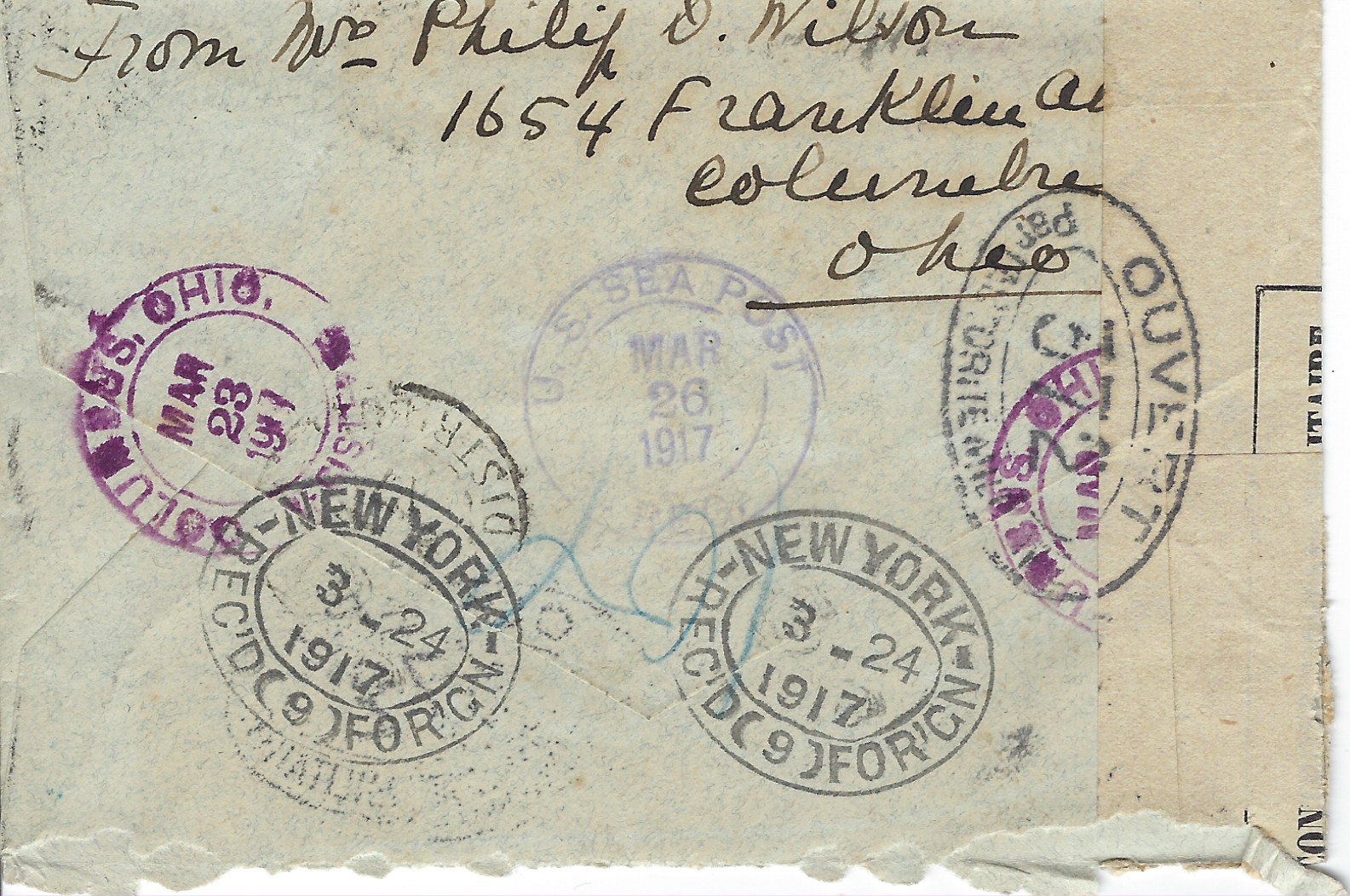 I was interested in this cover because on the reverse there is a "Registry" postmark of a boarding post office of the USA. I have seen these postmarks very rarely.

As usual, I began my research in the Library of Congress, looking for departures to France in the New York newspapers. I found that due to the war, departures to Europe were not reported. However, dates of arrival in Europe. Name of ship, date and either port, or just "French" or "British Port".

From the literature I knew the names of the ships of this seapost. All only French ships. Furthermore it was mentioned that the port in France was changed in 1915 from "Le Havre" to "Bordeaux", due to the U-boat War of the German Navy.
In the French censorship stamp there is the number "372". I found out that this belonged to the censorship office in Bordeaux. Was still missing the ship.

In the literature (Hosking - 2008) it is noted that until then no registered mails, i.e. with this postmark of the US board post office, but it is assumed that such must exist.

Archive of the "Library Of Congress", newspaper "The Sun" from New York