After the end of the First World War, HAPAG was left with nothing, so to speak. It had lost its entire fleet to the victorious powers and from about 22,000 employees before the war, there were now only 3,575 employees.
It also had to cope with a heavy blow with the death of Albert Ballin. In the book of Witthöft, from 1997, as a reason an overdose of tablets is suspected. But there are also speculations that he would have taken his own life.

By mid-1920, the German Empire's delivery obligations had been fulfilled. Germany now still had a merchant fleet of 673,000 GRT, excluding sailing vessels 419,000 GRT. In 1913, HAPAG alone had 1,038,645 GRT. Reconstruction could only take place with state aid.
Starting in June 1921, the fleet began to be rebuilt through repurchases of formerly German ships. Until the end of the first reconstruction phase in 1924 about 700,000 GRT of tonnage were bought back.

In 1920, negotiations were held with American companies such as the Kerr Group and the Harriman Group. For the Americans now owned ships - but the Germans had the "know how".
Negotiations with the Kerr Group failed, but a highlight in HAPAG's post-war history occurred, as a contract was signed with the Harriman Group that covered all of the lines operated by HAPAG before the war, except the one to East Asia.

Beginning in 1924, HAPAG's joint service with the NGL to New York, the "Deutsch Amerikanische Seepost/US German Sea Post" resumed. Now with American participation by ships of the UNITED STATES LINE.

At the end of the 20s, the two German shipping lines negotiated a joint contract, also due to the world economic crisis, which was concluded on March 20/22, 1930 as the " HAPAG-LLOYD Unions-Vertrag". This ensured the survival of both companies. Both companies remained independent. Both cooperated in some areas in order to reduce costs, which had become high in the meantime, and to absorb the Intercept the slump in sales.

In 1931, HAPAG was to receive compensation payments for seized passenger and cargo ships. However, because of the worldwide crisis, this did not so that HAPAG received funds from the banks only with a guarantee from the German Reich, which gave it influence over the business. Albert Ballin and his successors had always wanted to avoid this and were able to do so.
After long negotiations, it was decided to change the contract of 1930 from a "joint relationship" to an "operating relationship" converted and entered into force retroactively to 01 January 1935.

This can be seen, for example, in a letter that you can find under "HAPAG/HAPAG Letters". A letter from 1937 from Costa Rica to the Panama Canal Zone and addressed to "HAPAG-LLOYD". This company name has actually only existed since the merger of the two companies in 1970. 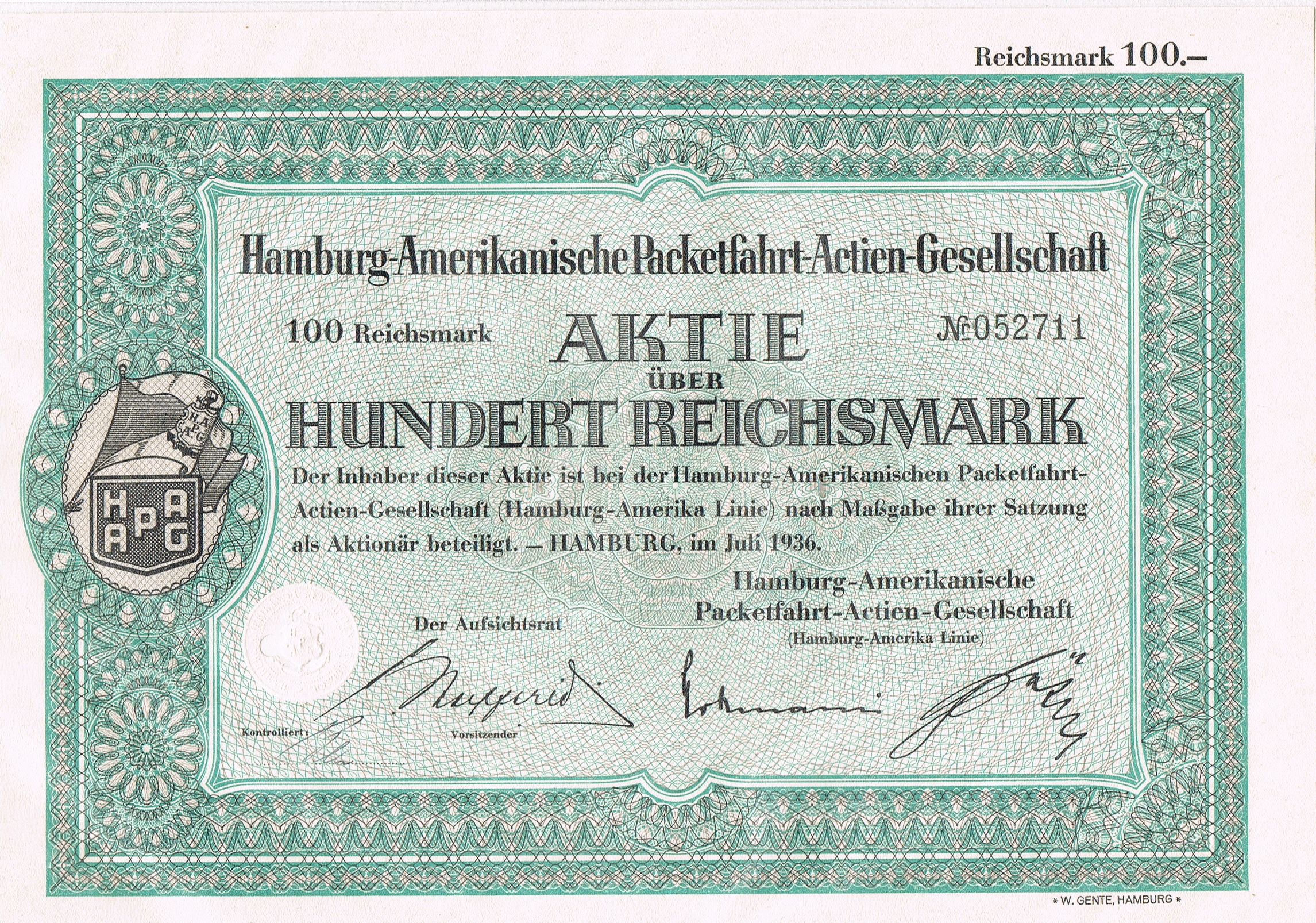 Share of HAPAG from July 1936.
Menu of the jubilee dinner held on April 20, 1937 aboard the steamer "HAMBURG".
Music card for the jubilee banquet. 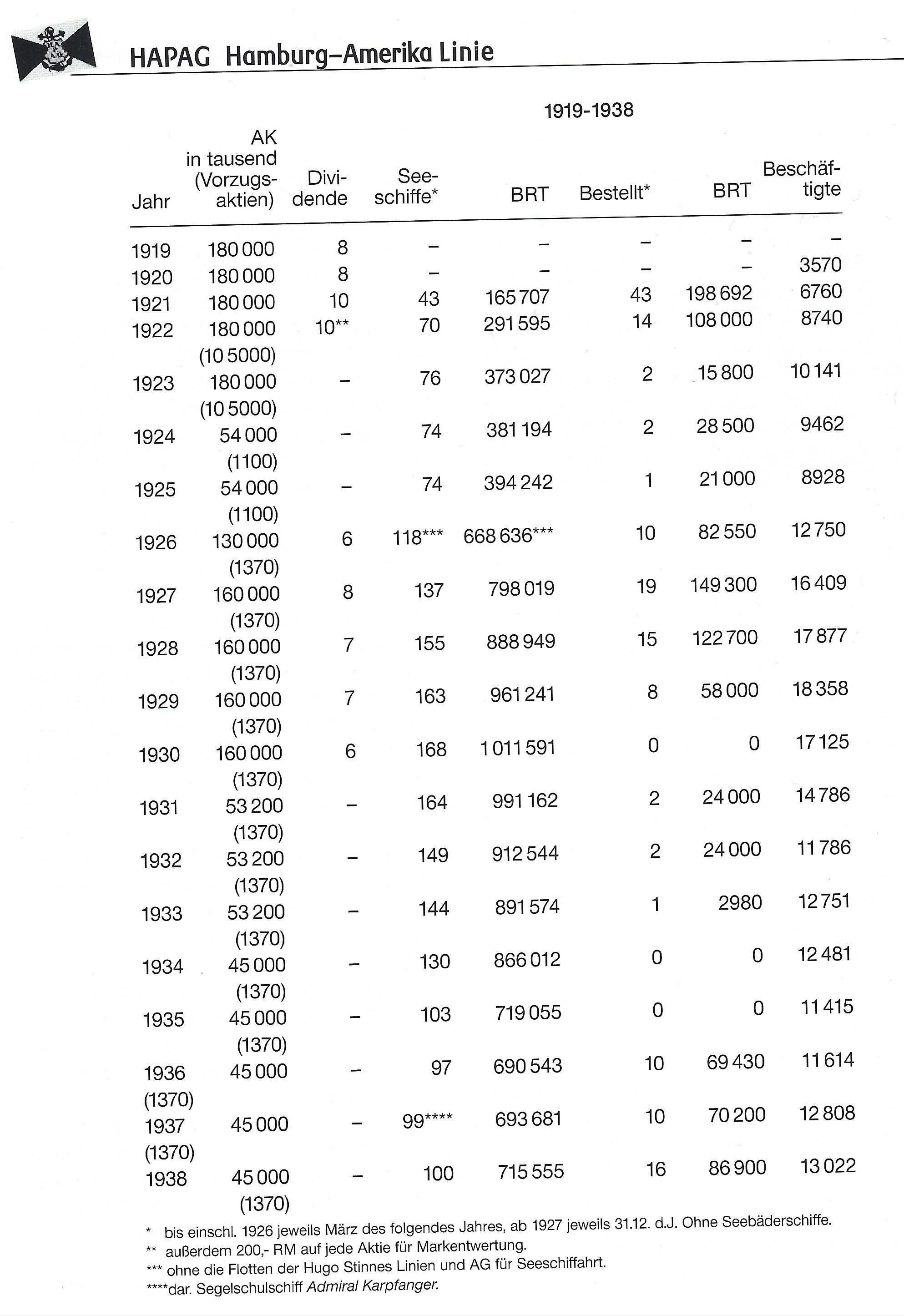 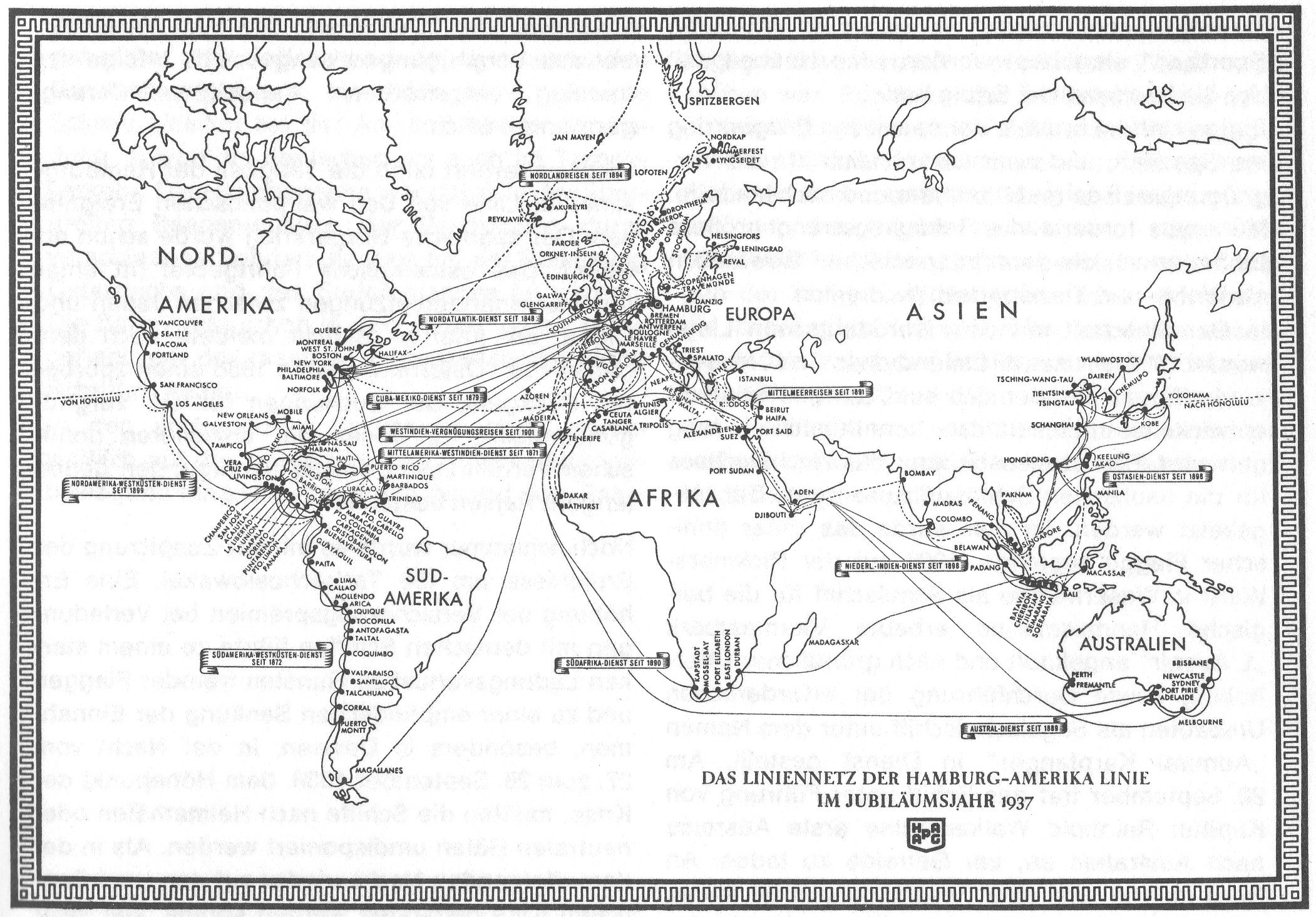 Luggage tag from a June 04, 1936 trip on the steamer "Hamburg" from New York to Hamburg.
Development of HAPAG from 1919 to 1938.
From: Witthöft
The HAPAG liner network in the anniversary year 1937.
From: Witthöft
Copyright Jürgen Kuseler 2022